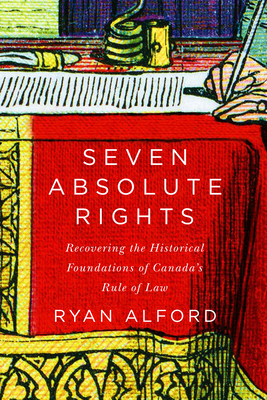 
Special Order—Subject to Availability
For 150 years, Canada's constitutional order has been both flexible and durable, ensuring peace, order, and good government while protecting the absolute rights at the core of the rule of law. In this era of transnational terrorism and proliferating emergency powers, it is essential to revisit how and why our constitutional order developed particular limits on the government's powers, which remain in force despite war, rebellion, and insurrection. Seven Absolute Rights surveys the historical foundations of Canada's rule of law and the ways they reinforce the Constitution. Ryan Alford provides a gripping narrative of constitutional history, beginning with the medieval and early modern context of Magna Carta, the Petition of Right, and the constitutional settlement of the Glorious Revolution. His reconstruction ends with a detailed examination of two pre-Confederation crises: the rebellions of 1837–38 and the riots of 1849, which, as he demonstrates, provide the missing constitutionalist context to the framing of the British North America Act. Through this accessible exploration of key events and legal precedents, Alford offers a distinct perspective on the substantive principles of the rule of law embedded in Canada's Constitution. In bringing constitutional history to life, Seven Absolute Rights reveals the history and meaning of these long-forgotten protections and shows why they remain fundamental to our freedom in the twenty-first century.
Ryan Alford is associate professor at the Bora Laskin Faculty of Law at Lakehead University, a bencher of the Law Society of Ontario, and author of Permanent State of Emergency: Unchecked Executive Power and the Demise of the Rule of Law.
"This is unlike any earlier work on Canadian law that I've come across. Strikingly novel in its approach, enormously informative, and immensely learned, Seven Absolute Rights is an impressive accomplishment that brings a valuable new perspective to studies of constitutionalism and the rule of law." Robert Diab, Thompson Rivers University