May We Be Spared to Meet on Earth: Letters of the Lost Franklin Arctic Expedition (Hardcover) 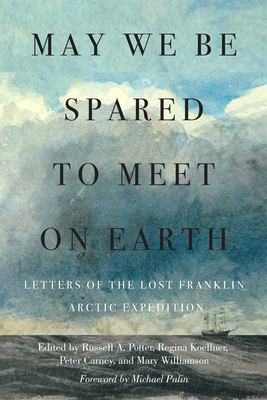 May We Be Spared to Meet on Earth: Letters of the Lost Franklin Arctic Expedition (Hardcover)

By Russell A. Potter (Editor), Regina Koellner (Editor), Peter Carney (Editor), Mary Williamson (Editor), Michael Palin (Foreword by)
List Price: $49.95
Our Price: $44.95
(Save: $5.00 10%)
On Our Shelves Now at:
May We Be Spared to Meet on Earth is a privileged glimpse into the private correspondence of the officers and sailors who set out in May 1845 on the Erebus and Terror for Sir John Franklin’s fateful expedition to the Arctic. The letters of the crew and their correspondents begin with the journey’s inception and early planning, going on to recount the ships’ departure from the river Thames, their progress up the eastern coast of Great Britain to Stromness in Orkney, and the crew’s exploits as far as the Whalefish Islands off the western coast of Greenland, from where the ships forever departed the society that sent them forth. As the realization dawned that something was amiss, heartfelt letters to the missing were sent with search expeditions; those letters, returned unread, tell poignant stories of hope. Assembled completely and conclusively from extensive archival research, including in far-flung family and private collections, the correspondence allows the reader to peer over the shoulders of these men, to experience their excitement and anticipation, their foolhardiness, and their fears. The Franklin expedition continues to excite enthusiasts and scholars worldwide. May We Be Spared to Meet on Earth provides new insights into the personalities of those on board, the significance of the voyage as they saw it, and the dawning awareness of the possibility that they would never return to British shores or their families.
Russell A. Potter is professor of English and media studies at Rhode Island College and the author of Finding Franklin: The Untold Story of a 165-Year Search. Regina Koellner is an independent researcher of polar history with a focus on the Franklin expedition. She lives in Hagen, Germany. Peter Carney writes the Erebus and Terror Files blog and has had a lifelong interest in archaeology. He lives in Hastings, UK. Mary Williamson is a descendent of Sir John Franklin and custodian of the family’s private archive. She lives in East Sussex, UK.
“Graced with an appropriately light editorial touch, May We Be Spared to Meet on Earth is a worthy enterprise that will be read and used by a growing cohort of scholars and Franklin sleuths on both sides of the Atlantic.” Shane McCorristine, Newcastle University

“May We Be Spared to Meet on Earth provides insight into the hopes and fears of the two crews, linking the officers and men to lives already lived: friendships and family connections of considerable complexity, magnetic and other scientific research, career prospects and reputation, and prospective marriages. Though the subject has inspired media interest around the globe, there is no other collection that assembles this material in a single volume, and the book will attract a wide readership.” Andrew Lambert, King’s College London

“Anyone who has engaged with the story of Sir John and Lady Franklin will experience this book as a kaleidoscopic remembrance. The more background you bring to this collection of letters, the more deeply you will feel it. And yet, because it is so present-tense, and brings both places and people so immediately to life, the book should also serve the those coming to the Franklin narrative for the first time.” The Globe and Mail