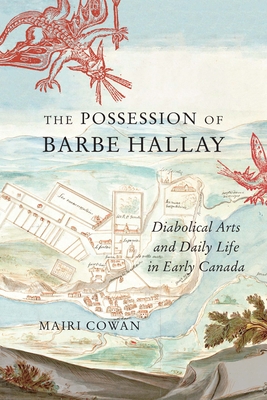 
Backordered
When strange signs appeared in the sky over Québec during the autumn of 1660, people began to worry about evil forces in their midst. They feared that witches and magicians had arrived in the colony, and a teenaged servant named Barbe Hallay started to act as if she were possessed. The community tried to make sense of what was happening, and why. Priests and nuns performed rituals to drive the demons away, while the bishop and the governor argued about how to investigate their suspicions of witchcraft. A local miller named Daniel Vuil, accused of using his knowledge of the dark arts to torment Hallay, was imprisoned and then executed. Stories of the demonic infestation circulated through the small settlement on the St Lawrence River for several years. In The Possession of Barbe Hallay Mairi Cowan revisits these stories to understand the everyday experiences and deep anxieties of people in New France. Her findings offer insight into beliefs about demonology and witchcraft, the limits of acceptable adolescent behaviour, the dissonance between a Catholic colony in theory and the church’s wavering influence in practice, the contested authority accorded to women as healers, and the insecurities of the colonial project. As the people living through the events knew at the time, and as this study reveals, New France was in a precarious position. The Possession of Barbe Hallay is both a fascinating account of a case of demonic possession and an accessible introduction to social and religious history in early modern North America.
Mairi Cowan is associate professor in the Department of Historical Studies, University of Toronto Mississauga.
“This outstanding account of how colonization, demonology, martyrology, and hagiography became intertwined in New France is both fascinating and instructive, providing a textured view of the beliefs and life conditions of Europeans and Indigenous people. In skilfully presenting arresting or amusing material without fanfare, Mairi Cowan takes readers on an emotional as well as an intellectual journey. Most historians cannot achieve this. The Possession of Barbe Hallay is a refreshing and engaging read.” Sarah Ferber, University of Wollongong and author of Demonic Possession and Exorcism in Early Modern France