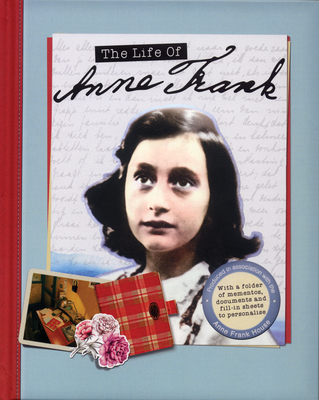 A compelling visual account of how a Jewish family tried to escape Nazism.

In August 1944, Anne Frank and her family were arrested. Anne was taken to Bergen-Belsen concentration camp where she died of typhus in early 1945, about six months after her arrest and just weeks before the British liberated the camp in April 1945. Anne's father fulfilled his promise and published 1,500 copies of Achterhuis, or The Secret Annex, in German. Since then the newly named Anne Frank: The Diary of a Young Girl has sold over 30 million copies in 70 languages.

The year 2020 marks the 75th anniversary of the young diarist's death. Anne wrote the diary during the 25 months that her family of four and four others were hiding in the top floor of an Amsterdam office building, now the Anne Frank Museum, which welcomes one and a half million visitors each year.

The Life of Anne Frank is a compelling factual account and timeline of those two years. Fascinating photographs show the still unchanged Annex, including the hidden entrance, and text takes readers directly inside to reveal the surroundings and Anne's story.

The book uses images and text plus a timeline to cover:

the lead-up to war and anti-Semitism the building, rented by Frank's father, and the decision to hide how the family escaped without detection a who's who of those hiding where they slept, cooked, bathed and ate how a typical day would pass the necessity to maintain absolute silence the helpers who brought food and news of the war the attic where Anne could catch a glimpse of nature Anne's desk where she put down her secret thoughts, fears and dreams the diary and why Anne wrote a second version Nazism, the concentration camps and the aftermath how other Jews hid during the war the discovery of the hideaway what happened to the residents when peace came.

Anne Frank's book is on school reading lists across the country. For many it is a reader's first if not only exposure to anti-Semitism and the Holocaust. The Life of Anne Frank makes this seminal time in history come alive. Young readers can grasp the context and place themselves in Anne's story. The vivid visual presentation throughout brings her ordeal to life in a way that words alone cannot, perhaps not even Anne's.

Kay Woodward has written over 150 fiction and nonfiction children's books.