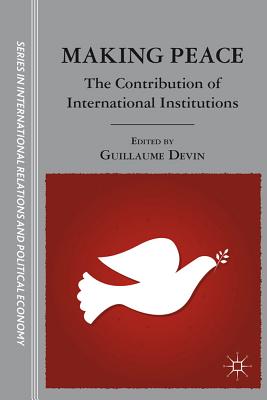 
Not On Our Shelves—Ships in 1-5 Days
Do international institutions really contribute to building a lasting peace? As diplomats, practitioners with these institutions, and experts on their processes, the authors underline the strengths and weaknesses that international actors have created and won't abandon.
GUILLAUME DEVIN Professor of Political Science at Sciences PO, Paris, France.

"This volume shows that there is a distinctly Francophone approach to peacemaking which is in refreshing contrast to the overwhelmingly ‘Anglo-Saxon’ predominance of the literature in the field. It is to be hoped that this volume will have a prominent place on all reading lists about international organizations." - Andrew Williams, Professor of International Relations, University of St Andrews, UK "Realists, in their attempted domination of the interpretation of international politics, tend to downplay the role of international institutions (or the existence of international peace, for that matter). This book reminds us that there is another side to international politics than war and hard power. Written by a European group of academic analysts and diplomatic practitioners, it draws our attention to the capital role of international organization and negotiation, not in idealistic elegy but in careful evaluation of the accomplishments and challenges. The book is not just a European but a universalistic perspective that merits our attention." - I. William Zartman, Jacob Blaustein Distinguished Professor Emeritus of International Organization and Conflict Resolution, The Nitze School of Advanced International Studies (SAIS), The Johns Hopkins University"A conceptually sophisticated and empirically rich study of the role of international institutions in keeping and promoting the peace. The authors analyze key topic areas, including weapons of mass destruction, their proliferation and mediation and apply them to diverse regions." - Richard Ned Lebow, James O. Freedman Presidential Professor of Government, Dartmouth College