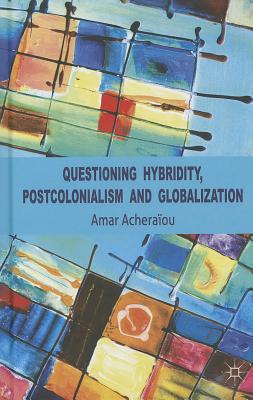 
Not On Our Shelves—Ships in 1-5 Days
AcheraIou analyzes hybridity using a theoretical, empirical approach that reorients debates on m tissage and the 'Third Space', arguing for the decolonization of postcolonialism. Hybridity is examined in the light of globalization, indicating how postcolonial discourse could become a counter-hegemonic ethics of resistance to global neoliberal doxa.
AMAR ACHERAIOU (PhD, Sorbonne Nouvelle) has published extensively on modernist literatures, postmodernist thought, and postcolonial theories. He is the author of Rethinking Postcolonialism: Colonialist Discourse in Modern Literatures and the Legacy of Classical Writers (Palgrave Macmillan, 2008); Joseph Conrad and the Reader: Questioning Modern Theories of Narrative and Readership (Palgrave Macmillan, 2009); and is the editor of Joseph Conrad and the Orient (forthcoming).

"This is a fine and timely book that contributes with new perspectives to the current concern in postcolonial and cultural studies of broadening the scope of hybridity theory. AcheraIou's book expands our awareness of the history of hybridity and hybridity as a product of historical processes, which altogether refines the notion of hybridity as a theoretical concept. The book is very well-written and communicates difficult material in a lucid and inviting manner. It offers new, compelling and productive ideas to theorists and students in postcolonial and globalisation studies." -- Sten Pultz Moslund, Postdoctoral Fellow, University of Southern Denmark