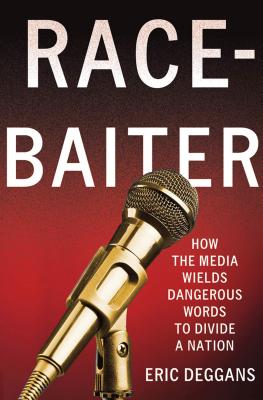 Gone is the era of Edward R. Murrow and Walter Cronkite, when news programs fought to gain the trust and respect of a wide spectrum of American viewers. Today, the fastest-growing news programs and media platforms are fighting hard for increasingly narrow segments of the public and playing on old prejudices and deep-rooted fears, coloring the conversation in the blogosphere and the cable news chatter to distract from the true issues at stake. Using the same tactics once used to mobilize political parties and committed voters, they send their fans coded messages and demonize opposing groups, in the process securing valuable audience share and website traffic. Race-baiter is a term born out of this tumultuous climate, coined by the conservative media to describe a person who uses racial tensions to arouse the passion and ire of a particular demographic. Even as the election of the first black president forces us all to reevaluate how we think about race, gender, culture, and class lines, some areas of modern media are working hard to push the same old buttons of conflict and division for new purposes. In Race-Baiter, veteran journalist and media critic Eric Deggans dissects the powerful ways modern media feeds fears, prejudices, and hate, while also tracing the history of the word and its consequences, intended or otherwise.

Eric Deggans is TV and Media Critic for the Tampa Bay Times, Florida’s largest newspaper, as well as a freelance contributor to National Public Radio, CNN.com and the Huffington Post. He is the author of Race-Baiter: How the Media Wields Dangerous Words to Divide a Nation. He regularly appears as a pundit/expert on MSNBC’s “Countdown”; CNN’s “Reliable Sources”; Fox News Channel’s “Fox and Friends” morning show and “Hannity and Colmes”; PBS’s “The NewsHour”; CNN Headline News’ “Showbiz Tonight”; “The Tavis Smiley Show” on Black Entertainment Television; and the PBS shows “Livelyhood” and “The Calling.” His work has also appeared in a host of newspapers and magazines ranging from the conservative Newsmax magazine to the Chicago Tribune, Seattle Times, Chicago Sun-Times, Detroit News and Miami Herald, VIBE magazine, Hispanic magazine and Ebony magazine.

“Mr. Deggans writes about race with clarity and wit. He understands and explains the politics of the broadcast and cable networks and the logic of its programming decisions without letting them off the hook for falling short of their own goals.” —The Pittsburgh Post Gazette

“Eric Deggans is one of the most insightful and provocative writers about television today. In his columns for the St Petersburg Times and his NPR commentaries, Deggans has established himself as a voice worth listening to. His many fans -- and I'm one of them -- will devour this book.” —Andy Borowitz

“If you care about this country, if you want to take part in a citizen's movement that helps heal the deep racial, economic, and cultural divides tearing us apart, you must read Eric Deggans' Race-Baiter. No book of recent vintage so thoroughly dissects the media's monetized appetite for division. Provocative, honest, and smart, Race-Baiter is a supremely important book. Read it and let the conversation begin.” —Connie May Fowler, Author of Before Women had Wings

“Eric Deggans proves that he is one of the most insightful and courageous writers covering today's fast-shifting media landscape. This is an important book.” —Michele Norris, NPR's All Things Considered and founder of The Race Card Project