The Truth about Syria (Paperback) 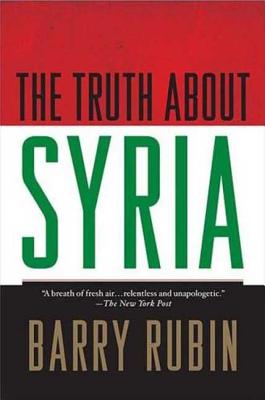 The Truth about Syria (Paperback)

American policymakers have wrestled with the Syria question for years, but it has gained particular urgency in light of the war between Hezbollah and Israel and the country's continued support for the Iraq insurgency. With its mix of competing religious and ethnic groups, radical ideologies, and ferocious political repression, the growing tension surrounding Syria presents an increasingly serious problem for the Middle East and U.S. foreign policy. Yet surprisingly, very little is known about this country and its role in shaping the destiny of the region. In this bold investigation, Middle East expert Barry Rubin looks at how the country has become the powderkeg of the Middle East and offers an insightful analysis of recent developments.

“Syria will play a major role in the years to come both as a player and an issue in world politics. This book, written by a veteran student of Middle East affairs, is the most up-to-date and reliable guide available on this subject.” —Walter Laqueur, Emeritus Professor, Georgetown University, and author of The Road to War

“In this book Barry Rubin takes Syria as a model of Arab tyranny. What might look like gratuitous violence, cruelty, or mendacity serves the purpose of shoring up the power of the one-man ruler and his regime, and is completely predictable. There is now no good reason for the West and its leaders to go along with this dynamic, indeed to feed it regularly. Rubin describes with care, and prescribes with caution. The achievement is as informed as it is humane.” —David Pryce-Jones, author of The Closed Circle: An Interpretation of the Arabs

“Barry Rubin's book is a much-needed examination that cuts through the delusions and fantasies currently in vogue about the Assad regime. Rubin nails the nature of Syria's rulers and their behavior, explaining why they are--and will always be--hard-line, chronic exporters of instability.” —Tony Badran, Research Fellow (Levant), Foundation for Defense of Democracies

“The Truth About Syria . . . is a welcome contribution to the largely unimpressive body of research on modern Syria. Rubin's well-sourced study provides an unvarnished appraisal of Syrian politics, making no apologies for the brutal internal and destabilizing foreign policies that characterized the 30 year rule of Syrian leader Hafiz Assad and that persist under Hafiz's son and successor Bashar. The Truth About Syria is informative, insightful, and readable, and is an important contribution toward understanding this important but understudied state.” —David Schenker, Senior Fellow in Arab Politics, Washington Institute for Near East Policy

“Professor Rubin's book comes at a time when the debate over Syria and its regime is growing throughout Europe and America. He courageously gathers evidence showing the impossibility of dealing with Syria or changing its behavior. The merit of Rubin's book lies in the thorough dissection of the regime's psychological conduct, and of the tools this dictatorship has used in the past and uses now to remain in power. Any approach to the Syrian problem that does not take Professor Rubin's analysis into consideration will be an incomplete one.” —Elie Fawaz, Lebanese political analyst