One Day Too Long: Top Secret Site 85 and the Bombing of North Vietnam (Paperback) 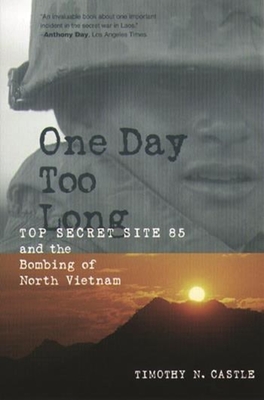 One Day Too Long: Top Secret Site 85 and the Bombing of North Vietnam (Paperback)


Not On Our Shelves—Ships in 1-5 Days
One of the Vietnam War's most closely guarded secrets--a highly classified U.S. radar base in the mountains of neutral Laos--led to the disappearance of a small group of elite military personnel, a loss never fully acknowledged by the American government. Now, thirty years later, one book recounts the harrowing story--and offers some measure of closure on this decades-old mystery. Because of the covert nature of the mission at Lima Site 85--providing bombing instructions to U.S. Air Force tactical aircraft from the "safe harbor" of a nation that was supposedly neutral--the wives of the eleven servicemen were warned in no uncertain terms never to discuss the truth about their husbands. But one wife, Ann Holland, refused to remain silent. Timothy Castle draws on her personal records and recollections as well as upon a wealth of interviews with surviving servicemen and recently declassified information to tell the full story. The result is a tale worthy of Tom Clancy but told by a scholar with meticulous attention to historical accuracy. More than just an account of government deception, One Day Too Long is the story of the courageous men who agreed to put their lives in danger to perform a critical mission in which they could not be officially acknowledged. Indeed the personnel at Site 85 agreed to be "sheep-dipped"--removed from their military status and technically placed in the employ of a civilian company. Castle reveals how the program, code-named "Heavy Green," was conceived and approved at the highest levels of the U.S. government. In spine tingling detail, he describes the selection of the men and the construction and operation of the radar facility on a mile-high cliff in neutral Laos, even as the North Vietnamese Army began encircling the mountain. He chronicles the communist air attack on Site 85, the only such aerial bombing of the entire Vietnam War. A saga of courage, cover-up, and intrigue One Day Too Long tells how, in a shocking betrayal of trust, for thirty years the U.S. government has sought to hide the facts and now seeks to acquiesce to perfidious Vietnamese explanations for the disappearance of eleven good men.
Timothy N. Castle served two tours in Southeast Asia during the Vietnam War, flying over Laos from Nakhon Phanom Air Force Base on thirty-eight combat support missions. Since 1990, he has traveled to Laos frequently as a researcher and senior Department of Defense POW/MIA investigator for Laos, and as a consultant for NBC News. He is senior researcher at the CIA Center for the Study of Intelligence. He is also the author of At War in the Shadow of Vietnam (Columbia).