Animal Lessons: How They Teach Us to Be Human (Hardcover) 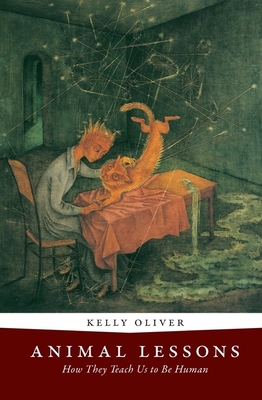 Animal Lessons: How They Teach Us to Be Human (Hardcover)


Special Order—Subject to Availability
Philosophy reads humanity against animality, arguing that "man" is man because he is separate from beast. Deftly challenging this position, Kelly Oliver proves that, in fact, it is the animal that teaches us to be human. Through their sex, their habits, and our perception of their purpose, animals show us how not to be them. This kinship plays out in a number of ways. We sacrifice animals to establish human kinship, but without the animal, the bonds of "brotherhood" fall apart. Either kinship with animals is possible or kinship with humans is impossible. Philosophy holds that humans and animals are distinct, but in defending this position, the discipline depends on a discourse that relies on the animal for its very definition of the human. Through these and other examples, Oliver does more than just establish an animal ethics. She transforms ethics by showing how its very origin is dependent upon the animal. Examining for the first time the treatment of the animal in the work of Heidegger, Merleau-Ponty, Derrida, Agamben, Freud, Lacan, and Kristeva, among others, Animal Lessons argues that the animal bites back, thereby reopening the question of the animal for philosophy.
Kelly Oliver is Alton Jones Professor of Philosophy at Vanderbilt University. She is the author of more than fifty articles and fifteen books, including Women as Weapons of War: Iraq, Sex, and the Media; The Colonization of Psychic Space: A Psychoanalytic Theory of Oppression; and Family Values: Subjects Between Nature and Culture.