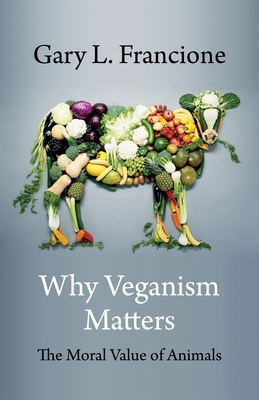 
Not On Our Shelves—Ships in 1-5 Days
Most people care about animals, but only a tiny fraction are vegan. The rest often think of veganism as an extreme position. They certainly do not believe that they have a moral obligation to become vegan. Gary L. Francione--the leading and most provocative scholar of animal rights theory and law--demonstrates that veganism is a moral imperative and a matter of justice. He shows that there is a contradiction in thinking that animals matter morally if one is also not vegan, and he explains why this belief should logically lead all who hold it to veganism. Francione dismantles the conventional wisdom that it is acceptable to use and kill animals as long as we do so "humanely." He argues that if animals matter morally, they must have the right not to be used as property. That means that we cannot eat them, wear them, use them, or otherwise treat them as resources or commodities. Why Veganism Matters presents the case for the personhood of nonhuman animals and for veganism in a clear and accessible way that does not require any philosophical or legal background. This book offers a persuasive and powerful argument for all readers who care about animals but are not sure whether they have a moral obligation to be vegan.
Gary L. Francione is Board of Governors Distinguished Professor of Law and Nicholas deB. Katzenbach Scholar of Law and Philosophy at Rutgers University Law School and visiting professor of philosophy at the University of Lincoln (UK). He is the author of many books, including Animals as Persons: Essays on the Abolition of Animal Exploitation (Columbia, 2008).