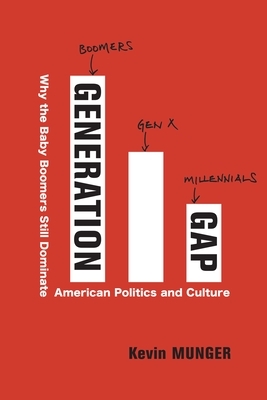 The Baby Boomers are the largest and most powerful generation in American history-and they aren't going away any time soon. They are, on average, whiter, wealthier, and more conservative than younger generations. They dominate cultural and political institutions and make up the largest slice of the electorate. Generational conflict, with Millennials and Generation Z pitted against the aging Boomer cohort, has become a media staple. Older and younger voters are increasingly at odds: Republicans as a whole skew gray-haired, and within the Democratic Party, the left-leaning youth vote propels primary challengers. The generation gap is widening into a political fault line.

Kevin Munger marshals novel data and survey evidence to argue that generational conflict will define the politics of the next decade. He examines the historical trends that made the Baby Boomers so consequential and traces the emergence of age-based political and cultural divisions. Boomers continue to prefer the media culture of their youth, but Millennials and Gen Z are using the internet to render legacy institutions irrelevant. These divergent media habits have led more people than ever to identify with their generation. Munger shows that a common "cohort consciousness" binds aging Boomer voters into a bloc-but a shared identity and purpose among Millennials and Gen Z could topple Boomer power.

Bringing together expertise in data analysis and digital culture with keen insight into contemporary politics, Generation Gap explains why the Baby Boomers remain so dominant and how quickly that might change.