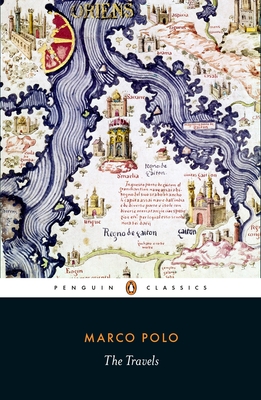 Marco Polo’s voyages began in 1271 with a visit to China. Afterward, he served Kublai Khan on numerous diplomatic missions in the Far East. His subsequent account of his travels offers a fascinating glimpse of what he encountered abroad: unfamiliar religions; new customs and societies; the spices and silks of the East; the precious gems, exotic vegetation, and wild beasts of faraway lands. Evoking a remote and long-vanished world with color and immediacy, Marco Polo’s book revolutionized Western ideas about the then-unknown East and remains one of the greatest travel accounts of all time. Nigel Cliff’s new translation, based on the original medieval sources, is a fresh, authoritative rendering, with a lively introduction and notes.

For more than seventy years, Penguin has been the leading publisher of classic literature in the English-speaking world. With more than 1,700 titles, Penguin Classics represents a global bookshelf of the best works throughout history and across genres and disciplines. Readers trust the series to provide authoritative texts enhanced by introductions and notes by distinguished scholars and contemporary authors, as well as up-to-date translations by award-winning translators.
Marco Polo travelled to China in 1271 and spent the next twenty years in the service of Kublai Khan. He wrote his famous Travels after returning home, whilst a prisoner in Genoa.

Nigel Cliff was previously a theatre and film critic for The Times and a regular writer for The Economist, among other publications, and now writes historical nonfiction books. His first book, The Shakespeare Riots, was published in 2007 and shortlisted for the Washington-based National Award for Arts Writing. His second book, The Last Crusade: Vasco da Gama and the Birth of the Modern World, appeared in 2011 and was shortlisted for the PEN Hessell-Tiltman Prize.