Conversations with Goethe: In the Last Years of His Life (Paperback) 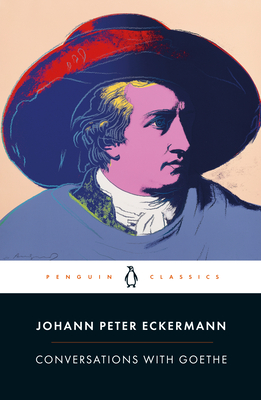 Conversations with Goethe: In the Last Years of His Life (Paperback)


On Our Shelves Now at:
A witty introduction to the mind of Goethe, in a new translation for the first time in 150 years

By the end of the nineteenth century, Johann Wolfgang von Goethe was the world's most celebrated poet, novelist, critic and thinker. Today his name is echoed as that of a "great man" alongside Plato, Montaigne and Shakespeare. This book covers the last nine years of his life, partially spent having conversations with the young Johann Eckermann, who was thirty-one to Goethe's seventy-four, and who dedicated this time to recording Goethe's thoughts, ideas, observations and witticisms. The result is Conversations with Goethe, the most direct glimpse into the Great Man's mind, revealing a gentler, more human side to him, as well as his thoughts on art, science, poetry, philosophy and the minutiae of life. Conversations of Goethe is an incredibly important and enjoyable document of "the last universal genius of the West." It is often compared to Boswell's Life of Johnson for its enjoyability and importance.
Johann Peter Eckermann was born in 1792 in Harburg. In 1823 he sent Goethe, his childhood idol, the manuscript of his book, and he became Goethe's unpaid literary assistant for nine years. This long relationship led to the creation of Eckermann's most well-remembered work Conversations of Goethe, first published in 1836. Eckermann died in 1854 in Weimar, Prussia.