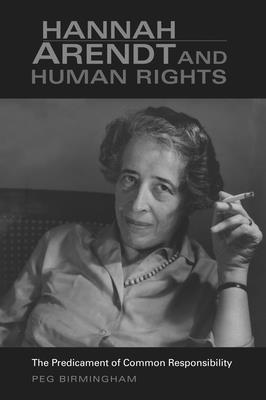 
Hannah Arendt's most important contribution to political thought may be her well-known and often-cited notion of the "right to have rights." In this incisive and wide-ranging book, Peg Birmingham explores the theoretical and social foundations of Arendt's philosophy on human rights. Devoting special consideration to questions and issues surrounding Arendt's ideas of common humanity, human responsibility, and natality, Birmingham formulates a more complex view of how these basic concepts support Arendt's theory of human rights. Birmingham considers Arendt's key philosophical works along with her literary writings, especially those on Walter Benjamin and Franz Kafka, to reveal the extent of Arendt's commitment to humanity even as violence, horror, and pessimism overtook Europe during World War II and its aftermath. This current and lively book makes a significant contribution to philosophy, political science, and European intellectual history.
Peg Birmingham is Professor of Philosophy at DePaul University. She is co-editor of Dissensus Communis: Between Ethics and Politics and co-translator of Dominique Janicaud's Powers of the Rational (IUP, 1994).