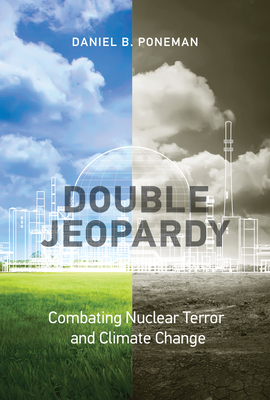 By Daniel B. Poneman


Special Order—Subject to Availability
Making the case that we can use nuclear power to combat climate change even as we reduce the risks of nuclear terror.

Humanity faces two existential threats: nuclear annihilation and catastrophic climate change. Both have human origins, and both are linked to the use of nuclear energy. Inherent in the use of atomic fission is the risk that the technology and materials can be diverted to terrorists or hostile nations and used to make nuclear weapons. The key question is whether we can use nuclear energy to reduce the threat of climate change without increasing the risk that nuclear weapons will be used.

In Double Jeopardy, Daniel Poneman argues that the world needs an “all-of-the-above” energy policy, one that advances the goal of decarbonizing the environment through all available means—including nuclear power. Poneman makes a compelling case that we can enhance the ability of nuclear power to combat climate change even as we reduce the risks of nuclear terror. Doing so will require well-crafted laws and policies, implemented with an ethos of constant vigilance and embedded in a culture that weaves safety and security goals into the fabric of our nuclear programs. This will enable government and industry to work together to maximize energy and climate benefits while minimizing safety and security risks.

Daniel Poneman is a Senior Fellow with the Belfer Center at the Harvard Kennedy School and the President and Chief Executive Officer of Centrus Energy Corp., which provides enrichment, fuel, and fuel services to utilities that operate nuclear reactors throughout the world. Poneman previously served as Deputy Secretary of the U.S. Department of Energy, as Acting Secretary of Energy, and on the National Security Council staff. He is the coauthor of Going Critical: The First North Korean Nuclear Crisis.
Poneman says that there are two existential threats to human existence: climate change and nuclear proliferation and terrorism. The first, he argues, requires a greater investment in nuclear energy to reduce humanity's dependence on carbon fuels—but this, he notes, risks aggravating the second threat. So his recommendations address both threats together. He proposes shifting to lower-carbon energy sources, including nuclear power; fully implementing the Paris climate agreement; and, among other nonproliferation moves, eliminating the North Korean nuclear threat. It's a daunting list.—Foreign Affairs—