Energy at the End of the World: An Orkney Islands Saga (Infrastructures) (Hardcover) 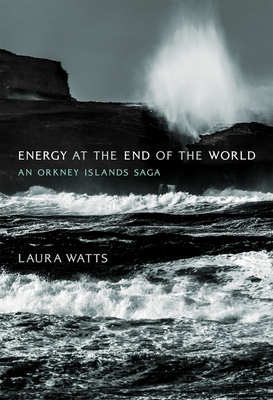 Energy at the End of the World: An Orkney Islands Saga (Infrastructures) (Hardcover)


Special Order—Subject to Availability
Making local energy futures, from marine energy to hydrogen fuel, at the edge of the world.

The islands of Orkney, off the northern coast of Scotland, are closer to the Arctic Circle than to London. Surrounded by fierce seas and shrouded by clouds and mist, the islands seem to mark the edge of the known world. And yet they are a center for energy technology innovation, from marine energy to hydrogen fuel networks, attracting the interest of venture capitalists and local communities. In this book, Laura Watts tells a story of making energy futures at the edge of the world.

Orkney, Watts tells us, has been making technology for six thousand years, from arrowheads and stone circles to wave and tide energy prototypes. Artifacts and traces of all the ages—Stone, Bronze, Iron, Viking, Silicon—are visible everywhere. The islanders turned to energy innovation when forced to contend with an energy infrastructure they had outgrown. Today, Orkney is home to the European Marine Energy Centre, established in 2003. There are about forty open-sea marine energy test facilities in the world, many of which draw on Orkney expertise. The islands generate more renewable energy than they use, are growing hydrogen fuel and electric car networks, and have hundreds of locally owned micro wind turbines and a decade-old smart grid. Mixing storytelling and ethnography, empiricism and lyricism, Watts tells an Orkney energy saga—an account of how the islands are creating their own low-carbon future in the face of the seemingly impossible. The Orkney Islands, Watts shows, are playing a long game, making energy futures for another six thousand years.

Laura Watts is a poet, writer, ethnographer of futures, and Interdisciplinary Senior Lecturer in Energy and Society in the School of Geosciences at the University of Edinburgh. As a science and technology studies scholar she has explored the effect of “edge” landscapes on how the future is imagined and made. She is coauthor of Ebban an' Flowan, the world's first poetic primer for marine renewable energy, and in 2017 she won the International Cultural Innovation Prize with the Reconstrained Design Group for a community-built energy storage device designed from scrap.
Winner of the 2021 Rachel Carson Prize by the Society for Social Studies of Science

"Tells the intriguing tale of how Orcadians have begun to create their own low-carbon future against incredible odds and with only a little help from the mainland."—Observer

"The greatest contribution of Watts's book, and it is a striking one, is that the Orcadian idiom for talking about energy infrastructures is guided largely by thinking about relationships – and relationships necessarily involve pasts, presents and futures."—Times Literary Supplement

"Innovation and perseverance are two of the most important qualities that Dr. Laura Watts identifies as the driving forces behind the renewable energy revolution taking place in the Orkney Islands. The Scottish archipelago is on the leading edge of the world's energy future and as Dr. Watts explores in her recent book, Energy At The End Of The World, the projects taking place in Orkney are at the cutting-edge of technology."—Forbes