Dressing Up: The Women Who Influenced French Fashion (Hardcover) 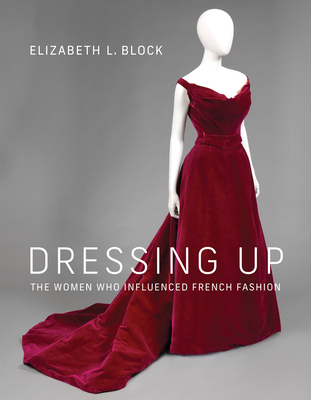 Dressing Up: The Women Who Influenced French Fashion (Hardcover)


In Stock—Click for Locations
How wealthy American women--as consumers and as influencers--helped shape French couture of the late nineteenth century; lavishly illustrated.

French fashion of the late nineteenth century is known for its allure, its ineffable chic--think of John Singer Sargent's Madame X and her scandalously slipping strap. For Parisian couturiers and their American customers, it was also serious business. In Dressing Up, Elizabeth Block examines the couturiers' influential clientele--wealthy American women who bolstered the French fashion industry with a steady stream of orders from the United States. Countering the usual narrative of the designer as solo creative genius, Block shows that these women--as high-volume customers and as pre-Internet influencers--were active participants in the era's transnational fashion system.

Block describes the arrival of nouveau riche Americans on the French fashion scene, joining European royalty, French socialites, and famous actresses on the client rosters of the best fashion houses--Charles Frederick Worth, Doucet, and Félix, among others. She considers the mutual dependence of couture and coiffure; the participation of couturiers in international expositions (with mixed financial results); the distinctive shopping practices of American women, which ranged from extensive transatlantic travel to quick trips downtown to the department store; the performance of conspicuous consumption at balls and soirées; the impact of American tariffs on the French fashion industry; and the emergence of smuggling, theft, and illicit copying of French fashions in the American market as the middle class emulated the preferences of the rich. Lavishly illustrated, with vibrant images of dresses, portraits, and fashion plates, Dressing Up reveals the power of American women in French couture.

Winner of the Aileen Ribeiro Grant of the Association of Dress Historians; an Association for Art History grant; and a Pasold Research Fund grant.
Elizabeth L. Block, an art historian, is Senior Editor in the Publications and Editorial Department at the Metropolitan Museum of Art in New York. She has contributed to publications including American Art and West 86th: A Journal of Decorative Arts, Design History, and Material Culture.
"This handsomely illustrated, anecdotal volume illuminates the symbiotic relationship between late-19th-century Parisian fashion houses and their well-to-do American clients. Block, a senior editor for the Metropolitan Museum of Art’s publication department, writes winningly."
—the Washington Post


Winner of the Victorian Society in America Book Award, 2022