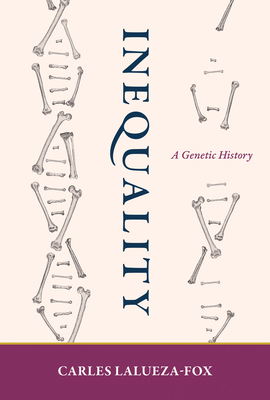 
Backordered
How genomics reveals deep histories of inequality, going back many thousands of years.


Inequality is an urgent global concern, with pundits, politicians, academics, and best-selling books all taking up its causes and consequences. In Inequality, Carles Lalueza-Fox offers an entirely new perspective on the subject, examining the genetic marks left by inequality on humans throughout history. Lalueza-Fox describes genetic studies, made possible by novel DNA sequencing technologies, that reveal layers of inequality in past societies, manifested in patterns of migration, social structures, and funerary practices. Through their DNA, ancient skeletons have much to tell us, yielding anonymous stories of inequality, bias, and suffering.

Lalueza-Fox, a leader in paleogenomics, offers the deep history of inequality. He explores the ancestral shifts associated with migration and describes the gender bias unearthed in these migrations—the brutal sexual asymmetries, for example, between male European explorers and the women of Latin America that are revealed by DNA analysis. He considers social structures, and the evidence that high social standing was inherited—the ancient world was not a meritocracy. He untangles social and genetic factors to consider whether wealth is an advantage in reproduction, showing why we are more likely to be descended from a king than a peasant. And he explores the effects of ancient inequality on the human gene pool. Marshaling a range of evidence, Lalueza-Fox shows that understanding past inequalities is key to understanding present ones.

Carles Lalueza-Fox is Research Professor and Director of the Paleogenomics Lab at the Institute of Evolutionary Biology (CSIC-Universitat Pompeu Fabra) in Barcelona. He participated in the Neandertal Genome Project and led the first retrieval of the genome of an 8,000-year-old European hunter-gatherer.