Can We Price Carbon? (American and Comparative Environmental Policy) (Paperback) 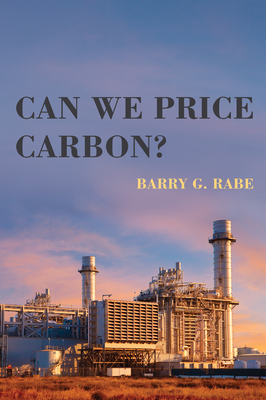 Can We Price Carbon? (American and Comparative Environmental Policy) (Paperback)


Special Order—Subject to Availability
A political science analysis of the feasibility and sustainability of carbon pricing, drawing from North American, European, and Asian case studies.

Climate change, economists generally agree, is best addressed by putting a price on the carbon content of fossil fuels—by taxing carbon, by cap-and-trade systems, or other methods. But what about the politics of carbon pricing? Do political realities render carbon pricing impracticable? In this book, Barry Rabe offers the first major political science analysis of the feasibility and sustainability of carbon pricing, drawing upon a series of real-world attempts to price carbon over the last two decades in North America, Europe, and Asia.

Rabe asks whether these policies have proven politically viable and, if adopted, whether they survive political shifts and managerial challenges over time. The entire policy life cycle is examined, from adoption through advanced implementation, on a range of pricing policies including not only carbon taxes and cap-and-trade but also such alternative methods as taxing fossil fuel extraction. These case studies, Rabe argues, show that despite the considerable political difficulties, carbon pricing can be both feasible and durable.

Barry G. Rabe is J. Ira and Nicki Harris Family Professor of Public Policy and Arthur F. Thurnau Professor of Environmental Policy at the University of Michigan, where his primary appointment is in the Gerald R. Ford School of Public Policy. He also directs the Center for Local, State, and Urban Policy at the Ford School and is a Non-Resident Senior Fellow at the Brookings Institution.
Fitting of the diverse and complex histories of carbon pricing, Rabe offers no silver bullet. However, his careful scholarship and thoughtful analysis yield many important and nuanced insights.—Nature Climate Change—