A Biography of the Pixel (Leonardo) (Paperback) 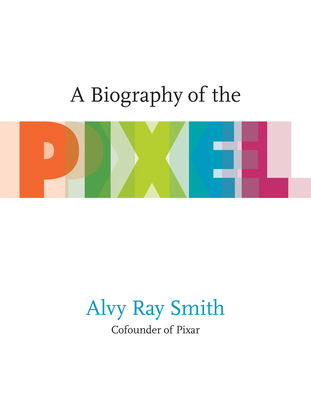 A Biography of the Pixel (Leonardo) (Paperback)


Backordered
The pixel as the organizing principle of all pictures, from cave paintings to Toy Story.

The Great Digital Convergence of all media types into one universal digital medium occurred, with little fanfare, at the recent turn of the millennium. The bit became the universal medium, and the pixel--a particular packaging of bits--conquered the world. Henceforward, nearly every picture in the world would be composed of pixels--cell phone pictures, app interfaces, Mars Rover transmissions, book illustrations, videogames. In A Biography of the Pixel, Pixar cofounder Alvy Ray Smith argues that the pixel is the organizing principle of most modern media, and he presents a few simple but profound ideas that unify the dazzling varieties of digital image making.

Smith's story of the pixel's development begins with Fourier waves, proceeds through Turing machines, and ends with the first digital movies from Pixar, DreamWorks, and Blue Sky. Today, almost all the pictures we encounter are digital--mediated by the pixel and irretrievably separated from their media; museums and kindergartens are two of the last outposts of the analog. Smith explains, engagingly and accessibly, how pictures composed of invisible stuff become visible--that is, how digital pixels convert to analog display elements. Taking the special case of digital movies to represent all of Digital Light (his term for pictures constructed of pixels), and drawing on his decades of work in the field, Smith approaches his subject from multiple angles--art, technology, entertainment, business, and history. A Biography of the Pixel is essential reading for anyone who has watched a video on a cell phone, played a videogame, or seen a movie. 400 pages of annotations, prepared by the author and available online, provide an invaluable resource for readers.

Alvy Ray Smith cofounded Pixar and Altamira Software. He was the first Director of Computer Graphics at Lucasfilm and the first Graphics Fellow at Microsoft. He has received two technical Academy Awards for his contribution to digital moviemaking technology.
“[Smith] lays out a grand unified theory of digital expression. Pixel is a deep and challenging tome in the spirit of Douglas Hofstadter’s Gödel, Escher, Bach: An Eternal Golden Br­aid, a winding tale of science, heroes, and tyrants, all leading to the moment, sometime around the beginning of our current century, when a long-­predicted digital convergence coalesced.“
—WIRED

“Like the pixels that power the imagery all around us, A Biography of the Pixel is a dazzling game of connect-the-dot...to describe what he’s written just as a history of computer graphics would be woefully inadequate.”
—Fast Company

"A Biography of the Pixel is an essential and pleasant read for all those who regularly engage in a lot of media content: whether you’re an avid gamer, a film enthusiast, or simply like to browse the Internet. In fact, if you’re aspiring to pursue a career in filmmaking and/or animation, perhaps this book would inspire you further."
—E&T, Engineering and Technology

“We suspect that the digital world is grainier than the real, coarser, more constricted, and stubbornly rectilinear. But this is a prejudice, one that’s neatly punctured in A Biography of the Pixel, a new book by electrical engineer Alvy Ray Smith, co-founder of US computer animation studio Pixar. This eccentric work traces the intellectual genealogy of Toy Story (Pixar’s first feature-length computer animation in 1995) over bump-maps and around occlusions, through endless samples, computations and transformations, back to the mathematics of the 18th century.”
—The Telegraph

“Smith reminds us that few great ideas come from the mythical lone genius. Many important innovators and alternative paths tend to be left out of such stories, an issue he tries to correct here.”
—ZDNet