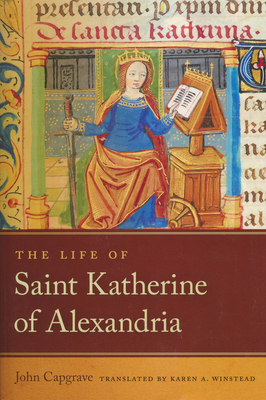 The fifteenth-century scholar and Augustinian friar John Capgrave took as his subject the virgin martyr Katherine of Alexandria, who was an anomalous cultural icon, a scholar, and a sovereign whose story unsettled traditional gender stereotypes yet was widely popular throughout Western Europe. Capgrave's Life of Saint Katherine of Alexandria (ca. 1445) stands out among the hundreds of surviving vernacular and Latin narrations about the saint by its intricate plotting, its moral complexity, its obtrusive Chaucerian narrator, and its attention to psychology, history, and theology. The Life of Saint Katherine is a bold literary experiment that transforms the genre of the saint's life by infusing it with conventions and techniques more often associated with chronicles, mystery plays, fabliaux, and romances.

In Capgrave's hands, Katherine emerges as a sensitive and studious young woman torn between social responsibilities and personal desires. Her story unfolds in a vividly realized world of political turmoil and religious repression that, as Capgrave's readers were bound to suspect, had everything to do with the England they inhabited and its recent past. Katherine's debate with her lords anticipates arguments for and against female rule that would be made in Tudor England, when the ascensions of Mary I and then Elizabeth I made gynecocracy a political reality, while her debate with the philosophers is a daring exercise in vernacular theology that flouts the censorship then current.

Winstead's translation--the first into idiomatic modern English--brings to life Capgrave's sharply drawn characters, compelling plot, and complex, unsettling moral. Its promotion of an informed, intellectualized Christianity during a period known for censorship and repression illuminates the struggle over the definition of orthodoxy that was excited by the perceived threat of Lollard heresy during the fifteenth century. This volume also includes an appendix with passages of Capgrave's original Middle English and literal translations into modern English, providing a valuable tool for teachers and students.

Karen A. Winstead is professor of English at the Ohio State University.