Clandestine Encounters: Philosophy in the Narratives of Maurice Blanchot (Hardcover) 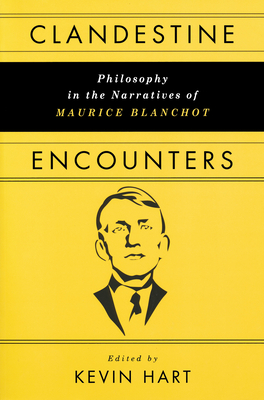 Clandestine Encounters: Philosophy in the Narratives of Maurice Blanchot (Hardcover)

Maurice Blanchot is perhaps best known as a major French intellectual of the twentieth century: the man who countered Sartre's views on literature, who affirmed the work of Sade and Lautr amont, who gave eloquent voice to the generation of '68, and whose philosophical and literary work influenced the writing of, among others, Jacques Derrida, Gilles Deleuze, and Michel Foucault. He is also regarded as one of the most acute narrative writers in France since Marcel Proust.

In Clandestine Encounters, Kevin Hart has gathered together major literary critics in Britain, France, and the United States to engage with Blanchot's immense, fascinating, and difficult body of creative work. Hart's substantial introduction usefully places Blanchot as a significant contributor to the tradition of the French philosophical novel, beginning with Voltaire's Candide in 1759, and best known through the works of Sartre. Clandestine Encounters considers a selection of Blanchot's narrative writings over the course of almost sixty years, from stories written in the mid-1930s to L'instant de ma mort (1994). Collectively, the contributors' close readings of Blanchot's novels, recits, and stories illuminate the close relationship between philosophy and narrative in his work while underscoring the variety and complexity of these narratives.

Kevin Hart is Edwin B. Kyle Professor of Christian Studies in the Department of Religious Studies, and Courtesy Professor in the Departments of English and French at the University of Virginia. He is the author of a number of books, including The Dark Gaze: Maurice Blanchot and the Sacred, and the editor of Counter-Experiences: Reading Jean-Luc Marion (University of Notre Dame Press, 2007).