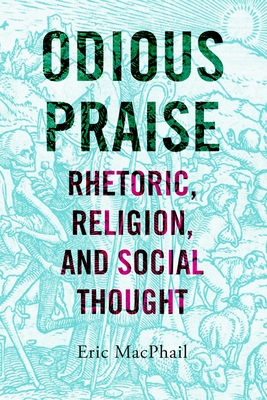 This book reveals a tradition of thought overlooked in our intellectual history but enormously influential even now: the tradition of odious praise. Distinct from more conventional rhetorical exercises, such as panegyric or the funeral oration, odious praise uses acclaim to censure or to critique. This book reassesses the genre of praise-and-blame rhetoric by considering the potential of odious praise to undermine consensus and to challenge a society's normative values.

Surveying literature from ancient Greece to Renaissance Europe, Eric MacPhail identifies a tradition of epideictic rhetoric that began with the sophists but was cultivated and employed most vigorously by Renaissance political thinkers. Presenting examples from the writings of Lorenzo Valla, Niccol Machiavelli, Desiderius Erasmus, Michel de Montaigne, Joachim du Bellay, and Jean Bodin, among others, MacPhail shows that by inscribing a positive value to an object worthy of blame, cultural values are turned on their head. MacPhail traces the use of this technique to critique the values of the classical and scholastic traditions. Recognizing and engaging with this tradition, MacPhail argues, can reinvigorate our study of the history of social thought and reveal further the roots of modern social science.

Rigorous and lucid, Odious Praise presents a rhetoric capable of suspending and thus critiquing the values of a culture, and in doing so, it uncovers the first serious attempts at social thought and the seedbed of modern social science. It will be welcomed by scholars of Renaissance literature and culture, the history of rhetoric, and political thought.

Eric MacPhail is Professor of French and Adjunct Professor of Comparative Literature at Indiana University and editor of the journal Erasmus Studies. His books include The Sophistic Renaissance, Dancing Around the Well, and Religious Tolerance from Renaissance to Enlightenment.