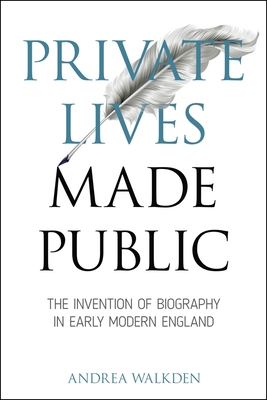 Following the trial and execution of Charles I in 1649, the seventeenth century witnessed an explosion of print culture in England, including an unprecedented boom in biographical writing. Andrea Walkden offers a case-study examination of this fascinating trend, bringing together texts that generations of scholars have considered piecemeal and primarily as sources for their own research.

Private Lives Made Public: The Invention of Biography in Early Modern England contributes an incisive, fresh take on life-writing--a catch-all label that, in contemporary discourse, encompasses biography, autobiography, memoirs, letters, diaries, journals, and even blogs and examines why the writing of life stories appeared somehow newly necessary and newly challenging for political discourse in the late seventeenth century. Walkden engages readers in a compelling discussion of what she terms biographical populism, arguing that the biographies of this period sought to replace political argument with life stories, thus conducting politics by another means. The modern biography, then, emerges after 1649 as a cultural weapon designed to reorient political discourse away from the analysis of public institutions and practices toward a less threatening, but similarly meaningful, conversation about the unfolding of an individual's life in the realm of private experience.

Unlike other recent studies, Walkden moves toward a consideration of widely consumed works--the Eikon Basilike, Izaak Walton's Lives, John Aubrey's Brief Lives, and Daniel Defoe's Memoirs of a Cavalier--and gives particular attention to their complex engagement with that political and literary moment.

Andrea Walkden is assistant professor and director of graduate studies in English at Queens College, City University of New York. Her writing focuses on early modern British literature, including the poetry and prose of John Milton. Walkden has contributed to Writing Lives: Biography and Textuality, Identity and Representation in Early Modern England, as well as the journals SEL: Studies in English Literature, 1500-1900, and English Literary History.