A Time to Rise: Collective Memoirs of the Union of Democratic Filipinos (KDP) (Paperback) 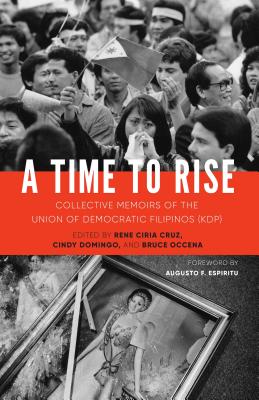 A Time to Rise: Collective Memoirs of the Union of Democratic Filipinos (KDP) (Paperback)

A Time to Rise is an intimate look into the workings of the KDP, the only revolutionary organization that emerged in the Filipino American community during the politically turbulent 1970s and '80s. Overcoming cultural and class differences, members of the KDP banded together in a single national organization to mobilize their community into civil rights and antiwar movements in the United States and in the fight for democracy and national liberation in the Philippines and elsewhere.

These personal accounts document recruitment, organizing, and training in the KDP. More than two-thirds of the stories are by women, reflecting the powerful role they played in the organization and its leadership. Also included are chapters on the struggle for justice for murdered KDP and union leaders Silme Domingo and Gene Viernes. These memoirs offer political insights and inspiring examples of personal courage that will resonate today.

A Time to Rise was made possible in part by a grant from 4Culture's Heritage Program.

Rene Ciria Cruz is US bureau chief for Inquirer.net, the official site of the Philippine Daily Inquirer. He was a founding member of the KDP and editor of their newspaper, Katipunan. Cindy Domingo is a long time human rights activist and joined the KDP in the fall of 1974. After the murders of Gene Viernes and her brother Silme Domingo, she became national coordinator of the Committee for Justice for Domingo and Viernes until the group won its landmark federal civil suit against the Marcoses and their codefendants in 1989. Bruce Occena is a health care professional and instructor at City College of San Francisco. He was a founding member of the KDP and chaired the National Executive Committee.