Kingdoms Of The Yoruba (Paperback) 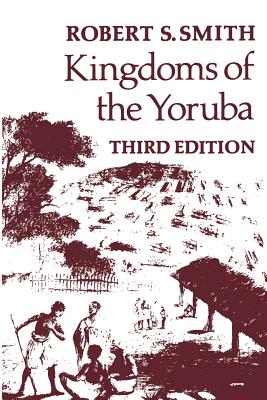 Kingdoms Of The Yoruba (Paperback)


Not On Our Shelves—Ships in 1-5 Days
This third edition of what has been described as “this minor classic” has been extensively revised to take account of advances in Nigerian historiography.
The twenty million Yorubas are one of the largest and most important groups of people on the African continent. Historically they were organized in a series of autonomous kingdoms and their past is richly recorded in oral tradition and archaeology. From the fifteenth century onwards there are descriptions by visitors and from the nineteenth century there are abundant official reports from administrators and missionaries.
Yoruba sculpture in stone, metal, ivory, and wood is famous. Less well-known are the elaborate and carefully designed constitutional forms which were evolved in the separate kingdoms, the methods of warfare and diplomacy, the oral literature, and the religion based on the worship of a “high god” surrounded by a pantheon of more accessible deities. Many of these aspects are shown in the drawings and photographs which have been used—for the first time—to illustrate this distinguished work.

Robert S. Smith was senior lecturer and professor of history at the Universities of Ibadan and Lagos, and the Obafemi Awolowo University, the three longest-established universities in the Yoruba-speaking part of Nigeria. He is author of many works, including Warfare and Diplomacy in Pre-colonial West Africa and The Lagos Consulate, and is co-author with Professor J.F.A. Ajayi of Yoruba Warfare in the Nineteenth Century.

"An elegant and clear introduction to this complex history.  It is based on a sound scholarly knowledge of the literature as well as the oral history—which is particularly rich for the Yoruba.  It would be central to any course on Nigerian history  .  .  .  and stands in its own right as a scholarly work.”—Michael Crowder, Amherst College