Slave Trade and Abolition: Gender, Commerce, and Economic Transition in Luanda (Women in Africa and the Diaspora) (Paperback) 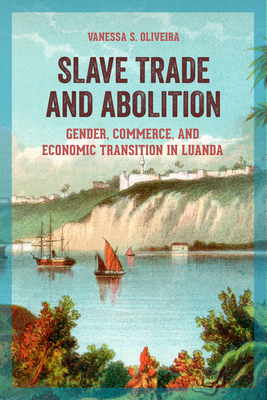 Slave Trade and Abolition: Gender, Commerce, and Economic Transition in Luanda (Women in Africa and the Diaspora) (Paperback)


Coming Soon—Pre-Order Now
Well into the early nineteenth century, Luanda, the administrative capital of Portuguese Angola, was one of the most influential ports for the transatlantic slave trade. Between 1801 and 1850, it served as the point of embarkation for more than 535,000 enslaved Africans. In the history of this diverse, wealthy city, the gendered dynamics of the merchant community have frequently been overlooked.

Vanessa S. Oliveira traces how existing commercial networks adapted to changes in the Atlantic slave trade during the first half of the nineteenth century. Slave Trade and Abolition reveals how women known as donas (a term adapted from the title granted to noble and royal women in the Iberian Peninsula) were often important cultural brokers. Acting as intermediaries between foreign and local people, they held high socioeconomic status and even competed with the male merchants who controlled the trade. Oliveira provides rich evidence to explore the many ways this Luso-African community influenced its society. In doing so, she reveals an unexpectedly nuanced economy with regard to the dynamics of gender and authority.
Vanessa S. Oliveira is an assistant professor of African history at the Royal Military College of Canada and the coeditor of Slavery, Memory, and Citizenship.
“Well researched and organized, this is a major social and economic study on Luanda’s past. Oliveira examines new sources and convincingly demonstrates the central role African women played in the social and economic organization of Luanda. Mandatory reading for those interested in urban slavery, slave trade, and African’s urban past.”—Mariana P. Candido, University of Notre Dame

“In describing women’s urban work in relation to food production, land ownership, legal issues regarding marriage and inheritance, and the shift from the international slave trade to ‘legitimate’ trade while continuing to rely on slave labor, Oliveira brings new insights to African history with her focus on nineteenth-century Luanda.”—Kathleen Sheldon, University of California, Los Angeles

“An important reading for a gendered analysis of the agency of peoples from the global south in nineteenth-century global transformations. . . . From the individual experiences of the Donas and their production of beans, to Brazil’s demand for enslaved people, this book connects powerful local transformations with global ones in nineteenth-century West Central Africa. It provides an encompassing overview of the experiences of the merchant elite in this process of transition.”—Journal of Global Slavery