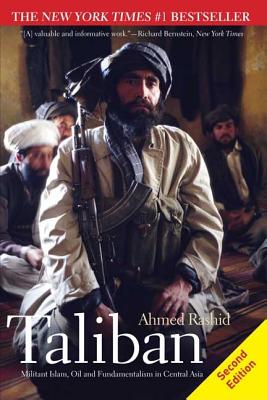 
Not On Our Shelves—Ships in 1-5 Days
“The standard work in English on the Taliban” (Christopher de Bellaigue, New York Review of Books) and its impact on Afghanistan

“An excellent political and historical account of the movement’s rise to power.”—Katha Pollitt, Nation

Ahmed Rashid, called "Pakistan's best and bravest reporter" by Christopher Hitchens, brings the shadowy world of the Taliban and its impact on Afghanistan and the Middle East and Central Asia into sharp focus in this modern classic. Rashid offers an authoritative account of the Taliban’s rise to power, its role in oil and gas company decisions, and the effects of changing American attitudes toward the Taliban. He also describes the new face of Islamic fundamentalism and explains why Afghanistan has become the world center for international terrorism.

In this updated edition, Rashid examines how the Taliban regained its strength; how and why the Taliban spread across Central Asia; how the Taliban helped Al'Qaida's spread into Europe, North Africa, the Middle East, and the Far east; and more.

Called “Pakistan’s best and bravest reporter” by Christopher Hitchens in Vanity Fair, Ahmed Rashid was a correspondent for the Far Eastern Economic Review for more than twenty years, covering Pakistan, Afghanistan, and central Asia. He now writes for BBC Online, the Washington Post, El Mundo, the International Herald Tribune, the New York Review of Books, and other foreign and Pakistani newspapers. He has been covering the wars in Afghanistan, as well as the wars in Pakistan and Tajikistan, since 1979. He is the author of Descent into Chaos and Jihad.
Praise for the First Edition of Taliban:

“A fabulous piece of journalism.”—Sebastian Junger, author of The Perfect Storm and Fire

“The best book on the Taliban.”—L. Carl Brown, Foreign Affairs

“An excellent political and historical account of the movement’s rise to power.”—Katha Pollitt, TheNation

“Virtually the only informed work on the men who, since 1994, have ruled almost all of Afghanistan. . . . [An] indispensable book.”—Steve Wasserman, Los Angeles Times Book Review

“[A] supremely insightful book about Afghanistan’s Taliban regime. . . . Rashid bases his account on detailed reporting and travel throughout Afghanistan and interviews with most of the Taliban’s elusive top leadership. As a narrative, it is gripping. . . . Rashid’s book is superbly reported, a window into a world that remains largely closed to American eyes.”—Shankar Vedantam, Philadelphia Inquirer

“Rashid’s densely detailed reportage portrays a country in ruins and the people who seek to control it. . . . Anyone contemplating new adventures in Afghanistan—whether to save its women from persecution, rescue the state from further fragmentation or save themselves from terrorist backlash—might first consult Rashid’s book.”—Paula R. Newberg, San Francisco Chronicle

“The standard work in English on the Taliban.”—Christopher de Bellaigue, New York Review of Books