Restless Valley: Revolution, Murder, and Intrigue in the Heart of Central Asia (Hardcover) 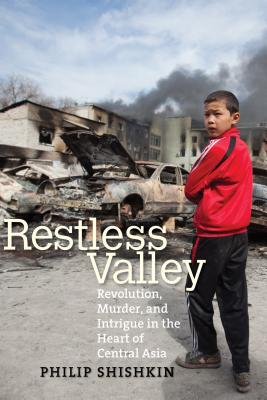 Restless Valley: Revolution, Murder, and Intrigue in the Heart of Central Asia (Hardcover)

It sounds like the stuff of a fiction thriller: two revolutions, a massacre of unarmed civilians, a civil war, a drug-smuggling highway, brazen corruption schemes, contract hits, and larger-than-life characters who may be villains . . . or heroes . . . or possibly both. Yet this book is not a work of fiction. It is instead a gripping, firsthand account of Central Asia's unfolding history from 2005 to the present.

Philip Shishkin, a prize-winning journalist with extensive on-the-ground experience in the tumultuous region above Afghanistan's northern border, focuses mainly on Kyrgyzstan and Uzbekistan. Both nations have struggled with the enormous challenges of post-Soviet independent statehood; both became entangled in America's Afghan campaign when U.S. military bases were established within their borders. At the same time, the region was developing into a key smuggling hub for Afghanistan's booming heroin trade. Through the eyes of local participants the powerful and the powerless Shishkin reconstructs how Kyrgyzstan and Uzbekistan have ricocheted between extreme repression and democratic strivings, how alliances with the United States and Russia have brought mixed blessings, and how Stalin's legacy of ethnic gerrymandering incites conflict even now.

Philip Shishkinwas an award-winning staff reporter for the Wall Street Journal. A fellow at the Asia Society, he is now a freelance writer based in Beijing."