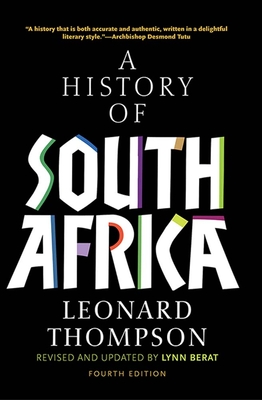 
Special Order—Subject to Availability
A fresh and penetrating exploration of South Africa’s history, from the earliest known human inhabitation of the region to the present

“I did not think it was possible for a white person to write a history of South Africa which a black South African would find to be a fair and accurate account of a beautiful land and its people. Leonard Thompson has disabused me of that notion. His is a history that is both accurate and authentic, written in a delightful literary style.”—Archbishop Desmond Tutu

The Fourth Edition of this classic text brings South Africa's history up to date with a new chapter chronicling the first presidential term of Mbeki and ending with the funeral of Nelson Mandela.

“An admirably objective history of South Africa . . . [that] will be most useful in contemplating the country’s future.”—Lorna Hahn, New York Times Book Review

“This is a work of insight and durability that is certain to assist South Africa’s coming generation of nation-builders to reach a more objective understanding of their past.”—Foreign Affairs

“Concentrating on southern Africa’s black inhabitants, rather than on its white minority, this work has received universal praise from scholars and activists alike.”—Washington Post Book World

“The text is basic for any reader who wishes to comprehend the historical patterns that preface the struggles that seethe and boil in this country. A careful, reliable book for student research.”—School Library Journal

Leonard Thompson was Charles J. Stillé Professor of History Emeritus at Yale University. Lynn Berat is an internationally renowned expert on southern African law and legal history who worked closely with Thompson on previous editions of A History of South Africa.
"Lynn Berat’s brilliant addition to Leonard Thompson’s superlative history takes the reader on a riveting tour of twenty-first century South Africa in all its triumph and tragedy."—Cindy Kaplan, Committed Artists of South Africa