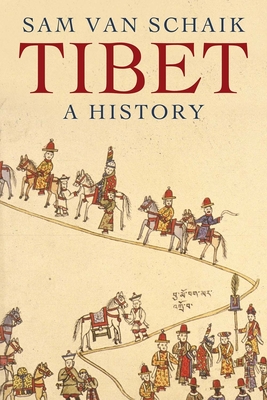 A timely and illuminating history of Tibet, from the seventh century to what it means to be Tibetan today

Situated north of the Himalayas, Tibet is famous for its unique culture and its controversial assimilation into modern China. Yet Tibet in the twenty-first century can only be properly understood in the context of its extraordinary history.

Sam van Schaik brings the history of Tibet to life by telling the stories of the people involved, from the glory days of the Tibetan empire in the seventh century through to the present day. He explores the emergence of Tibetan Buddhism and the rise of the Dalai Lamas, Tibet's entanglement in the "Great Game" in the early twentieth century, its submission to Chinese Communist rule in the 1950s, and the troubled times of recent decades.

Tibet sheds light on the country's complex relationship with China and explains often-misunderstood aspects of its culture, such as reborn lamas, monasteries and hermits, The Tibetan Book of the Dead, and the role of the Dalai Lama. Van Schaik works through the layers of history and myth to create a compelling narrative, one that offers readers a greater understanding of this important and controversial corner of the world.

Sam van Schaik is an expert on the early history of Tibet and Tibetan Buddhism. He is based at the British Library in London, where he works for the International Dunhuang Project. He is also the founder of the website www.EarlyTibet.com.

"A marvellous achievement, Tibet: A History provides a brilliant introduction to the ancient and varied culture of Tibet. Van Schaik expertly combines detailed research with compelling storytelling. Rich with details and lively vignettes, his narrative draws the reader into an imaginative universe, a world that will at once fascinate and complicate one's understanding of Tibet. This book will reward long-time students and casual readers alike."—Jacob P. Dalton, author of The Taming of the Demons: Violence and Liberation in Tibetan Buddhism

"Tibet: A History is an important and major history of Tibet written in narrative form by a leading scholar, in a style that is accessible, balanced and engaging, yet full of nuance, detail and up-to-date research findings."—Robert J. Barnett, Director of Modern Tibetan Studies, Columbia University