Turkey Under Erdogan: How a Country Turned from Democracy and the West (Hardcover) 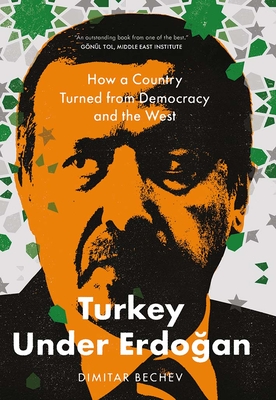 Turkey Under Erdogan: How a Country Turned from Democracy and the West (Hardcover)


On Our Shelves Now at:
An incisive account of Erdoğan’s Turkey – showing how its troubling transformation may be short-lived

Since coming to power in 2002 Recep Tayyip Erdoğan has overseen a radical transformation of Turkey. Once a pillar of the Western alliance, the country has embarked on a militaristic foreign policy, intervening in regional flashpoints from Nagorno-Karabakh to Libya. And its democracy, sustained by the aspiration to join the European Union, has given way to one-man rule.

Dimitar Bechev traces the political trajectory of Erdoğan’s populist regime, from the era of reform and prosperity in the 2000s to the effects of the war in neighboring Syria. In a tale of missed opportunities, Bechev explores how Turkey parted ways with the United States and Europe, embraced Putin’s Russia and other revisionist powers, and replaced a frail democratic regime with an authoritarian one. Despite this, he argues that Turkey’s democratic instincts are resilient, its economic ties to Europe are as strong as ever, and Erdoğan will fail to achieve a fully autocratic regime.
Dimitar Bechev is Lecturer at the Oxford School of Global and Area Studies (OSGA), University of Oxford. He is the author of Rival Power: Russia in Southeast Europe and coeditor of Russia Rising: Putin’s Foreign Policy in the Middle East and North Africa.

“A particular strength of [Bechev’s] book is that he does not attribute Turkey’s turn from democracy exclusively to Erdoğan, but emphasises “the authoritarian legacies shaping the state”, rooted in the Ottoman Empire and in the long rule of Mustafa Kemal Atatürk, who founded the modern secular republic in 1923 and held power until his death in 1938.”—Tony Barber, Financial Times

‘A sweeping attempt to capture the last 20 years of Turkey, Bechev skilfully traces the radical transformation of Turkey's domestic and foreign policies under Recep Tayyip Erdoğan. An outstanding book from one of the best.’Gönül Tol, Middle East Institute


‘A compelling narrative, rich in anecdotes, quotes, and carefully chosen empirical examples, enlivens an in-depth historical analysis of Turkey’s evolution from the 1970s until today. Bechev charts Turkey’s modernization, the rise of Islamist populism, its geopolitical shift from the periphery of the West to its bid for regional hegemony, as well as the weaknesses of the competitive authoritarian regime that its President Erdoğan has crafted.’
Rosa Balfour, Director of Carnegie Europe


‘Bechev analyzes the two decades that witnessed the evolution of President Erdoğan from a seemingly EU-friendly “Muslim democrat” to a strongman. He masterfully portrays how the shifts in AKP’s foreign policy were intertwined with rising authoritarian practices in Turkey.’
Professor Ayşe Kadıoğlu, Sabancı University