Arabs: A 3,000-Year History of Peoples, Tribes and Empires (Paperback) 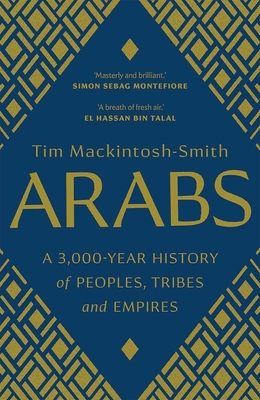 Arabs: A 3,000-Year History of Peoples, Tribes and Empires (Paperback)


On Our Shelves Now at:
A SUNDAY TIMES AND TLS BOOK OF THE YEAR

"A book of vast scope and stunning insight."—Anthony Sattin, Spectator

“Commanding erudition and a swashbuckling style define this history of the Arabs”—Justin Marozzi, Sunday Times

This kaleidoscopic book covers almost 3,000 years of Arab history and shines a light on the footloose Arab peoples and tribes who conquered lands and disseminated their language and culture over vast distances. Tracing this process to the origins of the Arabic language, rather than the advent of Islam, Tim Mackintosh-Smith begins his narrative more than a thousand years before Muhammad and focuses on how Arabic, both spoken and written, has functioned as a vital source of shared cultural identity over the millennia.

Mackintosh-Smith reveals how linguistic developments—from pre-Islamic poetry to the growth of script, Muhammad’s use of writing, and the later problems of printing Arabic—have helped and hindered the progress of Arab history, and investigates how, even in today’s politically fractured post–Arab Spring environment, Arabic itself is still a source of unity and disunity.
Tim Mackintosh-Smith is an eminent Arabist, translator, and traveler whose previous publications include Travels with a Tangerine and Yemen. He has lived in the Arab world for thirty-five years and is a senior fellow of the Library of Arabic Literature.
“Although Mackintosh-Smith’s book is perfectly scholarly, it is not a dutiful plod through a succession of slaughtered sultans and viziers or a tallying of gains and losses in forgotten battles in unpronounceable places. On the contrary, Arabs keeps throwing out brilliant insights, like sparks from a Catherine wheel.”—Robert Irwin, Literary Review

“A fascinating and richly detailed chronicle of Arab language and culture offers some thought-provoking historical parallels”—Ian Black, The Observer

“Commanding erudition and a swashbuckling style define this history of the Arabs”—Justin Marozzi, The Sunday Times

"Sweeping book [. . .] It addresses vital questions of Arab identity and nationhood. There can hardly be a better guide than Mackintosh-Smith, who has near- mythical status among western observers of the Middle East"—Richard Spencer, The Times Ireland

"[Mackintosh-Smith] is ideally positioned to make the tangled past vividly present. . . . [He] handles his complex account with great aplomb."—Eric Ormsby, Wall Street Journal

“A long time in the making, Tim Mackintosh-Smith’s erudite study, Arabs: A 3,000-Year History of Peoples, Tribes and Empires was worth the wait”—Justin Marozzi, Evening Standard (Best summer holiday reads)

“A marvelous journey brimming with adventure and poetry and narrated by a keen, compassionate observer.”—Kirkus Reviews (starred review)

"This new history of the Arabs is not the usual fact and date textbook tale but unfolds as a thoughtful and philosophical historical essay that analyzes the evolution of Arabic-speaking peoples, the Arabs and the Arabized, and the powerful role of their language in unity and diversity. . . . Highly recommended."—Choice

"This brilliant and fascinating history book will change the way we analyze the happenings in the Arab world."—Washington Book Review

“Superb. What really distinguishes this book from others is the sheer number of its insights into Arab history, all of which are tantalizing. There is also a poignancy to the telling of the complex story of the Arabs because of the circumstances Mackintosh-Smith finds himself in while writing, in virtual lock-down in Sana’a during the ongoing civil war and invasion of Yemen by Saudi Arabia and the UAE.”—Steven C. Caton, Professor of Contemporary Arab Studies at Harvard University

“This controversial new work by Mackintosh-Smith strips away centuries of erroneous myth-making and returns the turbulent history of the Arab peoples to the secure bedrock of their language. Anyone hoping to understand, let alone write about the Middle East, will need to read and inhale this profound, witty and scholarly achievement.”—Barnaby Rogerson, author of The Last Crusaders

“Arabs is a refined and pleasing tour through the history of a remarkable people, civilization and language. It’s in touch with the poetry of the desert a millennium and a half ago and the trauma of war in the mountains today"—Jonathan A.C. Brown, Alwaleed bin Talal Chair of Islamic Civilization at Georgetown University

"Masterly and brilliant. Arabs is a beautifully written narrative and acute analysis, both fresh and original, filled with fascinating characters and ideas, with as much depth before Islam as after and a true feeling not just for the Arab experience in history and faith but also for its language and culture. This book could only be written by a writer with a knowledge of the geography of the Arab soul as well as the Arab land."—Simon Sebag Montefiore, author of Jerusalem

"Quite brilliant. Arabs is well written with personal touches of someone who has experienced the last thirty years of Arab history at the very centre of things.  I am full of admiration for this inspiring book, with its quite original and timely view of Arab historical identity, and cannot wait to see it on the shelves."—Philip Kennedy, author of Recognition in the Arabic Narrative Tradition