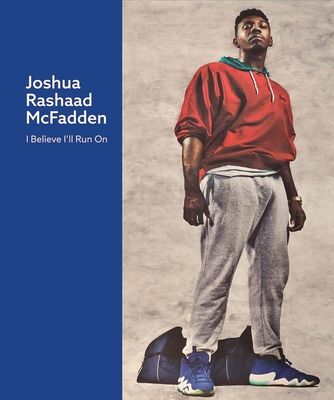 American artist Joshua Rashaad McFadden (b. 1990) makes photographs that explore and celebrate Black life in the United States. Published in conjunction with his first solo museum exhibition, Joshua Rashaad McFadden: I Believe I’ll Run On demonstrates his mastery of a wide range of photographic genres—social documentary, reportage, portraiture, and fine art—and his use of the medium to confront racism and anti-Black violence. Like Black photographers before him, such as Gordon Parks, Roy DeCarava, Carrie Mae Weems, Dawoud Bey, and LaToya Ruby Frazier, McFadden documents the beauty of Black life and illuminates the specificity of Black living in our historical present, including a series of impactful photographs devoted to the Black Lives Matter protests in 2020.

Along with a candid conversation between McFadden and artist Lyle Ashton Harris and an essay that traces McFadden’s meteoric career, this catalogue offers an overview of and insight into a poignant and deeply personal body of work, asserting McFadden’s key role in shaping the art and visual culture of the United States.
LaCharles Ward is a postdoctoral fellow at the Annenberg School of Communication at the University of Pennsylvania. Joshua Rashaad McFadden is an artist and assistant professor at the Rochester Institute of Technology. Lyle Ashton Harris is artist and professor of art and art education at New York University.