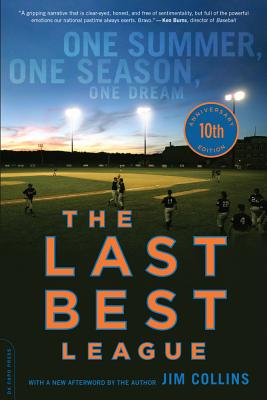 
Not On Our Shelves—Ships in 1-5 Days
Every summer, in ten small towns across Cape Cod, young college baseball players showcase their talents in hopes of making it to the "show." A vicious filter, the league has produced one out of every six major league players, from Nomar Garciaparra and Todd Helton to Jeff Bagwell and Barry Zito.In this brilliantly crafted narrative, Jim Collins chronicles a season in the life of the Chatham A's, perhaps the most celebrated team in the Cape Cod Baseball League. Set against a seemingly bucolic backdrop--a well-heeled resort town on the bend of the outer Cape -- the story charts the changing fortunes of a handful of players, all of whom battle slumps and self-doubt in an effort to impress major league scouts and make the playoffs. Several players go home with career-threatening injuries; one blue-chip prospect fulfills great expectations while another is dubbed "the biggest disappointment on the Cape." A pitcher hides an arm injury while negotiating a minor league contract; another leaves early to tend to his dying father. And nearly all look to the following year's major league draft as a barometer of their worth. Far more than a baseball book, The Last Best League is an engrossing story about dreams fulfilled and dreams destroyed, about Cape Cod and the rites of summer, about coming of age in America.
Jim Collins is former editor of Yankee magazine, a native New Englander, and a former college baseball player at Dartmouth. To research The Last Best League, he relocated his family from New Hampshire to Chatham, Massachusetts, attended every game, and was given complete insider's access to the team and players. He is an accomplished magazine writer whose work has twice been included in Best American Sportswriting.
"Jim Collins chronicled, with a careful eye and lyrical prose, the 2002 season of the Chatham A's...juxtaposing the joys of the game with the heartbreak that accompanies a player when he finds out that he is not good enough for the majors."
—Curled Up with a Good Book