Look at Me!: The XXXTENTACION Story (Paperback) 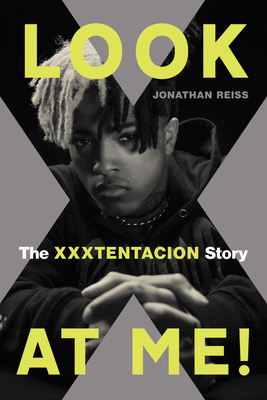 Look at Me!: The XXXTENTACION Story (Paperback)


Not On Our Shelves—Ships in 1-5 Days
A compelling biography of SoundCloud sensation and rising star XXXTENTACION -- from his candid songwriting and connection with fans to his tragic death.

At the age of twenty, rapper Jahseh Dwayne Onfroy-aka XXXTENTACION-was gunned down during an attempted robbery on the streets of Deerfield Beach, Florida, mere months after signing a $10 million record deal with Empire Music. A rising star in the world of SoundCloud rap, XXXTENTACION achieved stellar levels of success without the benefit of a major label or radio airtime, and flourished via his passionate and unfettered connection to his fans. In Look at Me!, journalist Jonathan Reiss charts the tumultuous life and unguarded songwriting of the SoundCloud sensation. Unlike most rap on the platform, XXXTENTACION's music didn't dwell on money, partying, and getting high. He wrote about depression, suicide, and other mental health issues, topics that led to an outpouring of posthumous appreciation from his devoted fanbase. It was XXXTENTACION's vulnerability that helped him stand apart from artists obsessed with being successful and "cool." Yet these insecurities also stemmed from-and contributed to-his fair share of troubles, including repeated run-ins with the law during his teen years, a disturbing proclivity toward violence, and a prison sentence that overlapped with the release of his first single. Through the memories of the people who knew him best, Look at Me! maps out the true story of an unlikely cultural icon and elucidates what it was about him that touched the post-millennial generation so deeply.
JONATHAN REISS has worked as a journalist for the last decade, contributing to outlets like Spin, Interview, and the New York Observer. He currently works as a contributing writer for Rolling Stone covering the opioid crisis. His debut novel, Getting Off, was published in 2018 to critical acclaim. Prior to that, he spent two years writing almost exclusively about hip-hop for leading magazines like The Source and Complex. Reiss lives in Brooklyn, New York.
"[Look at Me!] goes into unprecedented detail about X's murder"—The Miami New Times

"Filled with emotion, compassion, understanding, and accountability, Jonathan Reiss takes an honest look into what made XXXTENTACION beloved by so many yet hated by others."—SOHH