Don't Tell the Newfoundlanders: The True Story of Newfoundland's Confederation with Canada (Paperback) 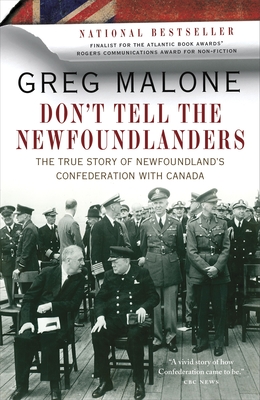 Don't Tell the Newfoundlanders: The True Story of Newfoundland's Confederation with Canada (Paperback)


Special Order—Subject to Availability
The true story, drawn from official documents and hours of personal interviews, of how Newfoundland and Labrador joined Confederation and became Canada's tenth province in 1949. A rich cast of characters--hailing from Britain, America, Canada and Newfoundland--battle it out for the prize of the resource-rich, financially solvent, militarily strategic island. The twists and turns are as dramatic as any spy novel and extremely surprising, since the "official" version of Newfoundland history has held for over fifty years almost without question. Don't Tell the Newfoundlanders will change all that.
GREG MALONE, with Tommy Sexton, began what became CODCO, a satirical comedy show that ran for 63 episodes on CBC TV and included Cathy Jones, Mary Walsh and Andy Jones. As a political activist, Malone participated in the campaign that stopped the privatization of Newfoundland and Labrador Hydro. Malone has championed other environmental causes, including fighting the importation of garbage to Newfoundland. After the death of Tommy Sexton, Malone devoted some years of his life to raise awareness of the impediment prejudice can be to the health care of persons infected with HIV or living with AIDS. He is the author of the acclaimed memoir, You Better Watch Out, and is currently a director and actor who lives in St. John's.

Finalist for the BMO Winterset Award

“Malone uncovers threads that when pulled could lead to the unravelling of our entire confederation. Reads like fiction but sadly is the shocking truth. Fascinating.” —Rick Mercer

“A surprising and fascinating history of how Newfoundland and Labrador became Canada’s tenth province.” —The Commentary

“Fascinating and thought-provoking.” —The Telegram

“Don’t Tell the Newfoundlanders is a serious work of scholarship and Malone’s grasp of the complicated history of a complicated period is masterful…. Malone…has a first-rate style which enables him to render complex historical detail accessible and vividly real to a wide swath of potential readers. I couldn’t put the book down.” —The Independent (Newfoundland and Labrador)

“I grew up, like many Newfoundlanders, sensing that something had been very wrong about the whole process of Confederation but not knowing exactly what. So I’m very grateful to Greg Malone for doing the research that finally lays the whole sordid story bare. It may or may not change the way Newfoundlanders behave towards Canada, but it will certainly change the way we think about the relationship.” —Gwynne Dyer