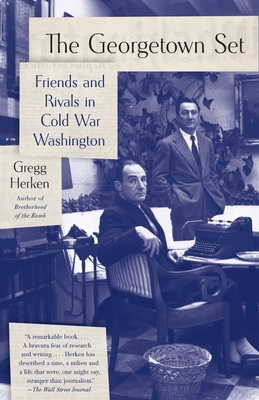 
Not On Our Shelves—Ships in 1-5 Days
In the years after World War II, Georgetown’s leafy streets were home to an unlikely group of Cold Warriors who helped shape American strategy. This coterie of affluent, well-educated, and connected civilians guided the country, for better and worse, from the Marshall Plan through McCarthyism, Watergate, and Vietnam. The Georgetown set included Phil and Kay Graham, husband-and-wife publishers of The Washington Post; Joe and Stewart Alsop, odd-couple brothers who were among the country’s premier political pundits; Frank Wisner, a driven, manic-depressive lawyer in charge of CIA covert operations; and a host of other diplomats, spies, and scholars. Gregg Herken gives us intimate portraits of these dedicated and talented, if deeply flawed, individuals, who navigated the Cold War years (often over cocktails and dinner) with very real consequences reaching into the present day. Throughout, he illuminates the drama and fascination of that noble, congenial, curious old world,” in Joe Alsop’s words, bringing this remarkable roster of men and women not only out into the open but vividly to life.

Gregg Herken is professor emeritus of modern American diplomatic history at the University of California and the author of Brotherhood of the Bomb, Cardinal Choices, Counsels of War, and The Winning Weapon, in addition to The Georgetown Set. He and his family live in Santa Cruz, California.

“A remarkable book. . . . A bravura feat of research and writing . . . Herken has described a time, a milieu and a life that were, one might say, stranger than journalism.” —The Wall Street Journal

“A lively and entertaining romp through the years of the Korean War, McCarthyism, the Cuban Missile Crisis, and Vietnam. . . . A case study in ‘the pitfalls to be encountered in the so-called access or elite form of journalism.’” —The Christian Science Monitor

“Herken reveals how, after World War II, that exclusive Washington enclave was home to a coterie of wealthy, well-educated, and well-connected diplomats, reporters, and spies who ‘inspired, promoted, and—in some cases—personally executed America’s winning Cold War strategy.’ . . . The handsome Georgetown mansions still stand today, but the ‘set’—one that could influence presidents and formulate stratagems over martinis and canapés—has long been consigned to history.” —Weekly Standard

“The past really is another country. Gregg Herken’s intriguing volume is a passport that enables us to visit the vanished country of Georgetown during the Cold War. There the braided political and social networks of a small cohort made, and reported, history.” —George F. Will

“Herken . . . goes into exacting detail in this excellent account, which focuses on the players themselves—their backgrounds, relationships, rivalries, scandals, and opinions on the policies and the events that defined the era . . . Herken covers, among a host of post-WWII milestones, the Marshall Plan, the Truman Doctrine, the founding of the CIA, McCarthyism, the Korean War, Vietnam, and Watergate. The skill with which he describes the players in Georgetown is not to be missed.” —Publishers Weekly (starred)

“Gregg Herken has diligently brought the old Eastern Establishment back to life in his The Georgetown Set. . . . [He] has connected the dots between these so-called ‘Wise Men of the 20th Century’ better than anybody else. An absolutely wonderful read!” —Douglas Brinkley, author of Cronkite

“An absolutely fascinating look into a world that has long remained half-hidden but was at the center of America’s post-war global supremacy. This book was waiting to be written, and Gregg Herken delivers with insight and panache.”  —Evan Thomas, author of The Very Best Men: The Early Years of the CIA and Ike’s Bluff

“Herken provides superb character studies of the brilliant, but occasionally, tortured politicians, journalists, diplomats and spies who populated the salons of Georgetown during the climactic years of the American Century. He describes their triumphs and disasters, love affairs and petty jealousies, strengths and foibles, with great skill and empathy. More than just a history book, this is the portrait of a vanished era.” —Michael Dobbs, author of Six Months in 1945

“Gregg Herken has written a compelling history of one of the big American stories of the last sixty years—how a WASP band of brothers led the United States to triumph in the Cold War and tragedy in Vietnam. They deserve, and in The Georgetown Set they get, full credit for both.” —Thomas Powers, author of The Man Who Kept the Secrets and The Killing of Crazy Horse