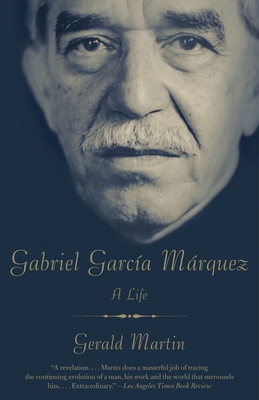 In this exhaustive and enlightening biography—nearly two decades in the making—Gerald Martin dexterously traces the life and times of one of the twentieth century’s greatest literary titans, Nobel Prize-winner Gabriel García Márquez.

Martin chronicles the particulars of an extraordinary life, from his upbringing in backwater Colombia and early journalism career, to the publication of One Hundred Years of Solitude at age forty, and the wealth and fame that followed. Based on interviews with more than three hundred of Garcia Marquez’s closest friends, family members, fellow authors, and detractors—as well as the many hours Martin spent with ‘Gabo’ himself—the result is a revelation of both the writer and the man. It is as gripping as any of Gabriel García Márquez’s powerful journalism, as enthralling as any of his acclaimed and beloved fiction.

Gerald Martin is Andrew W. Mellon Professor Emeritus of Modern Languages at the University of Pittsburgh and Senior Research Professor in Caribbean Studies at London Metropolitan University. For twenty-five years he was the only English-speaking member of the “Archives” Association of Twentieth-Century Latin American Literature in Paris, and he is a recent president of the International Institute of Ibero-American Literature in the United States. Among his publications are Journeys Through the Labyrinth: Latin American Fiction in the Twentieth Century, a translation and critical edition of Miguel Angel Asturias’s Men of Maize, and several contributions to the Cambridge History of Latin America. He lives in England.

“A revelation. . . . Martin does a masterful job of tracing the continuing evolution of a man, his work and the world that surrounds him. . . . Extraordinary.”
—Los Angeles Times Book Review

“Could any biographer have been better suited to this gargantuan undertaking? Absolutely not: Mr. Martin is the ideal man for the job. . . . An intensive, assured, penetratingly analytical book.”
—The New York Times

“Martin’s biography, a towering achievement of Latin American literary studies, reads beautifully, almost like a novel. . . . This enjoyable, impressive book will be mined for decades to come.”
—San Francisco Chronicle

“Terrific. . . . Crisp, clear, compelling. . . . A biography that is fresh and insightful about one of the most popular and influential writers of the 20th century.”
—USA Today

“A masterful, admiring (but far from fawning) biography. . . . A marvel of investigation, clarity and just plain sorting things out from the myths García Márquez has himself propagated, the book is particularly fascinating in charting the writer’s arduous climb from utter obscurity to fame.”
—The Chicago Sun-Times

“Abounds with fresh discoveries. . . . Will delight anyone interested in a novelist whose acclaim and appeal have been matched by his transforming influence on contemporary literature. . . . Martin’s book is proof that the literary biography is a genre in which scholars of Latin American literature have made remarkable contributions.”
—The Houston Chronicle

“If Martin has left any stone unturned it’s hard to imagine what that might be. . . . Meticulous.”
—The Christian Science Monitor

“Martin has made the most of the opportunities that García Márquez’s life offers. . . . He skillfully shows how a long journalistic apprenticeship led to the incredible creative explosion that produced One Hundred Years of Solitude.”
—Washington Post Book World

“[A] masterful and sensitive account—balanced, judicious, yet clearly also a stirringly enthusiastic labour of love. . . . It is and will be the authoritative work on the ‘new Cervantes,’ Latin America’s perhaps only truly global writer. . . . Very subtle and revealing.”
—Times Literary Supplement (London)

“A rich and resourceful biography.”
—Slate

“A riveting account not just of one man’s life, but of the time and place in which it was lived. . . . An absorbing book on one of the most beloved masters of modern literature.”
—St. Louis Post-Dispatch

“Readers might feel as if they’ve picked up one of the magical realist’s novels, for here are the family, friends and folktales that the writer fictionalized. . . . Accounts of the life dovetail with brilliant précis of Latin American literature and politics. . . . Its scholarship is peerless. Every poem, newspaper editorial and novel receives masterful analysis.”
—Time Out New York

“Richly detailed. . . . Martin’s lucid, swiftly paced study treats both the writer and his works with equal care, showing that it is impossible to separate one from the other —and showing as well that the world would be much the poorer without them.”
—St. Petersburg Times

“Márquez once remarked that ‘every self-respecting writer should have an English biographer.’ He could have asked for none more accomplished than Gerald Martin. . . . A monumental work.”
—Financial Times

“García Márquez’s life story is just as magical as anything in his fiction. . . . It is both a fine tribute to a remarkable artist and a fascinating cultural history of the region he helped to find its voice.”
—New Statesman

“[Martin is] extremely knowledgeable about Latin American literature in general, providing context and enthusiastic critical analysis of the kind that usually gets lost in a scoop of this size.”
—The Guardian (London)

“[Martin has a] profound knowledge of Latin American fiction [and] eloquently shows the extent to which [García Márquez’s] deeply personal obsession became irreversibly intertwined with his need to write. . . . Martin’s detailed analysis of García Márquez’s political life leaves no controversy or criticism untouched. Instead, with perceptiveness and lyricism, he offers his readers insight into the complexities of a subtle diplomat.”
—New Review

“The rags-to-riches tale of Gabriel García Márquez is rich biographical territory. . . . An engaging tribute to a much-loved author. . . . Entertaining.”
—Metro

“As a piece of investigation alone Martin’s book is an outstanding achievement unlikely ever to be bettered. . . . It is a rags-to-riches tale as absorbing and at times bizarre as anything in Márquez’s fiction. . . . In refreshing contrast to other literary biographers, Martin has managed to study his subject in intimate detail without ever wavering in his faith either in the man or in the writer. Martin’s passionate enthusiasm for Márquez gives the book much of its power and impetus. . . . His analyses of the novels are unfailingly perceptive. . . . Martin is a brave and superhumanly persistent biographer.”
—Literary Review

“Masterful. . . . Martin’s book, the product of 17 years of research, is an astonishing feat: a subtle tribute to a very complex man and an indispensable key to his life’s work.”
—Sunday Telegraph (London)

“Lucid. . . . [Martin] blends the stories and novels superbly into his narrative. . . . He is acute on Márquez’s solid marriage and on his protective friends. . . . [This book] helps readers to ground his exceptional fiction in history.”
—The Independent (London)