MASTER HAROLD AND THE BOYS: A Play (Vintage International) (Paperback) 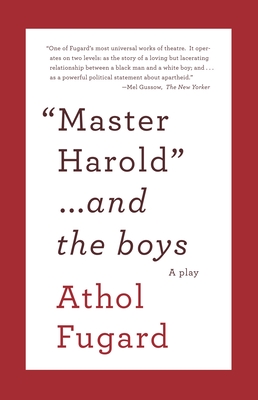 MASTER HAROLD AND THE BOYS: A Play (Vintage International) (Paperback)

A compelling drama of South African apartheid and a universal coming-of-age story, from "the greatest active playwright in the English-speaking world" (Time).

Originally produced in 1982, "Master Harold and the Boys" is now an acknowledged classic of the stage, whose themes of injustice, racism, friendship, and reconciliation traverse borders and time.

"One of Fugard's most universal works of theatre. It operates on two levels: as the story of a loving but lacerating relationship between a black man and a white boy; and ... as a powerful political statement about apartheid." —Mel Gussow, New Yorker

"The greatest active playwright in the English-speaking world." —Time

"In 'Master Harold' ... and the boys the author has journeyed so deep into the psychosis of racism that all national boundaries quickly fall away, that no one is left unimplicated by his vision.... Mr. Fugard has forced us to face point-blank, our capacity for hate ... but we're also left with the exultant hope that we may yet practice compassion without stumbling.... The choice, of course, is ours.  Mr. Fugard's wrenching play, which insists that we make it, is beyond beauty."—Frank Rich, The New York Times

"An exhilarating play ... a triumph of playmaking, and unforgettable!" —New York Post