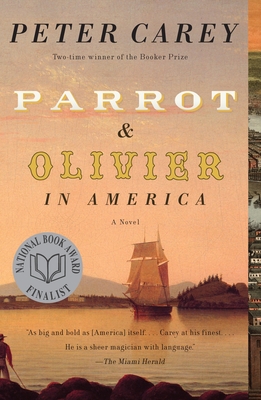 Olivier—an improvisation on the life of Alexis de Tocqueville—is an aristocrat born just after the French Revolution. Parrot is the motherless son of an itinerant English engraver. Their lives are joined when Olivier sets sail for the New World to save his neck from one more revolution and Parrot is sent with him as spy, protector, foe, and foil. With the story of their unlikely friendship, Peter Carey explores the adventure of American democracy with the dazzling inventiveness and richness of characterization, story, and language that we have come to expect from this superlative writer.

Peter Carey is the author of ten previous novels and has twice received the Booker Prize. His other honors include the Commonwealth Writers’ Prize and the Miles Franklin Literary Award. Born in Australia, he has lived in New York City for twenty years.

“Outrageous and witty. . . .Another feat of acrobatic ventriloquism, joining Carey’s masterpieces, Jack Maggs and True History of the Kelly Gang.” –The Washington Post

“Gorgeously entertaining and moving. . . . This is a novel of fierce attachments, charting the proximity of beauty and terror in the human soul.” —O, The Oprah Magazine

“Delicious. . . .A comic historical picaresque. . . .[This] book has an eighteenth-century robustness, a nineteenth-century lexicon, and a modern liberality.” –James Wood, The New Yorker

“Re-imagines Alexis de Tocqueville’s American journey with a verve that is nothing short of captivating. . . . A rollicking debate about America and its opportunities, its society and class distinctions.” —The Denver Post

“Carey is as various, often as brilliant, and always as irreverent as they come.” –The Boston Globe

“Amusing and wise and graceful to a degree that we almost don’t deserve.” —Salon

“An energetically intelligent novel. . . . It bristles like a hedgehog with all of Carey’s spiky ideas. . . . There’s enough to snag your imagination on, and to spare.” —The Christian Science Monitor

“Carey braids his story carefully, lovingly. . . .At its heart, Parrot and Olivier in America is a western; the simplest story in history, sculpted down to a twinkle in a philosopher’s eye: Man’s search for freedom.” –Los Angeles Times

“Parrot and Olivier [is]. . . . Peter Carey’s celebration of his marvelous discovery of how to write about—this time around—our own past.” —San Francisco Chronicle

“A dazzling, entertaining novel. . . . The language is vivid, forceful and poetic.” —The Guardian (London)

“Peter Carey is one of today’s best writers of literary historical fiction. . . . The novel is full of lush detail, period lingo, and plenty of Dickensian coincidence and excitement.” —The Charlotte Observer

“Extraordinarily allusive and joyously inventive. The numerous themes are spiced with his gutsy carnality. . . . A great deal of pleasure.” —The Daily Telegraph (London)

“Cranks its energy, like Don Quixote, out of the friction between two antipodal characters. . . . Hums with comic adventure.” —New York Magazine

“A comic, well-observed and meticulously crafted narrative. . . . Carey deftly and humorously brings debate into the narrative but seamlessly and organically within an immersive depiction of life 180 years ago.” —Buffalo News

“One assumes it was no simple thing for Peter Carey to give birth to this masterful, sprawling epic. But oh, the reader is so pleased that the effort succeeded.” —Pittsburgh Post-Gazette

“Even fuller than its predecessors of allusion, contrast, and comic contradiction. . . . It demands and repays repeated reading.” —The Times Literary Supplement (London)