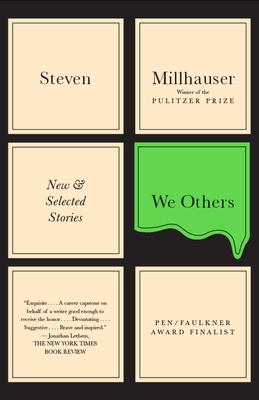 From the Pulitzer Prize–winning author: the essential stories across three decades that showcase his indomitable imagination.

Steven Millhauser’s fiction has consistently, and to dazzling effect, dissolved the boundaries between reality and fantasy, waking life and dreams, the past and the future, darkness and light, love and lust. The stories gathered here unfurl in settings as disparate as nineteenth-century Vienna, a contemporary Connecticut town, the corridors of a monstrous museum, and Thomas Edison’s laboratory, and they are inhabited by a wide-ranging cast of characters, including a knife thrower and teenage boys, ghosts and a cartoon cat and mouse. But all of the stories are united in their unfailing power to surprise and enchant. From the earliest to the stunning, previously unpublished novella-length title story—in which a man who is dead, but not quite gone, reaches out to two lonely women—Millhauser in this magnificent collection carves out ever more deeply his wondrous place in the American literary canon.
Steven Millhauser is the author of numerous works of fiction, including Martin Dressler, which was awarded the Pulitzer Prize in 1997, and, most recently, Dangerous Laughter, a New York Times Book Review Best Book of the Year. His work has been translated into fifteen languages, and his story “Eisenheim the Illusionist” was the basis of the 2006 film The Illusionist. He teaches at Skidmore College and lives in Saratoga Springs, New York.
“Powerful . . . A book of astonishingly beautiful and moving stories by one of America’s finest and most original writers. . . . Millhauser is one of the most imaginative writers we have, capable of pure invention. . . . Sublime.” —Charles Simic, The New York Review of Books

“Millhauser is a writer whose work partakes both of the dream logic strangeness of the post-Borgesian fictional tradition and the calm virtuosity of mass magazine American story writing. . . . . Steven Millhauser is at his best when he is mysterious but explicable—which is the case more now than ever.” —Times Literary Supplement

“Exquisite . . . I’m a Steven Millhauser fan. This kind of a book is a story-writer’s crown . . . a career capstone on behalf of writer good enough to receive the honor. . . . The opening story is my favorite among the new offerings . . . it is a mirror of unprecedented ungenerosity: it shows us only ourselves. . . . Devastating . . .Suggestive . . . Brave and inspired.”
—Jonathan Lethem, The New York Times Book Review

“Mesmerizing . . .  magical. We Others comprehends three decades of work, and it’s remarkable not only for the consistent delight it provides but also for the unwavering intensity of the vision that animates it.”—The Nation

“Outstanding . . . Each selection invites the reader to enter into the strangeness of a mysterious and fascinating place. Don’t miss these new and selected stories.” —The Providence Journal

“A Steven Millhauser story is meticulously worded, often off-kilter at heart, and deserving of comparisons to Borges and Kafka. He has built a reputation on producing a consistently mystifying and provocative product. In this volume of new and selected works written over 30 years, he offers us numerous tales from four volumes whose storylines have been creative loci for him for decades.” —The Boston Globe

“[We Others] is all the things a person wants a Steven Millhauser book to be: lapidary, disturbing, mandarin, brilliant, perverse, and funny.” —Slate

“Millhauser still wears the distinction of ‘short-story master’ around his neck like an albatross keeping him out of the spotlight. With the arrival of his newest collection, the career-spanner We Others, it’s clear that while he might prefer novels, short stories remain his most accessible and influential work. . . . [Millhauser’s] fierce imagination comes with a dark temperament instead of positive humor.”
—The A.V. Club

“Fantastic and enchanting. . . Millhauser is a master. . . . These stories will seize your attention—and your imagination—with the force of a vise grip.”—The Globe and Mail

“Many of the [twenty-one] stories collected [in We Others] walk the line between absurdism and realism to dizzying effect. . . . .Millhauser’s chops are indisputable, having won a Pulitzer for his novel Martin Dressler: The Tale of an American Dreamer. And both the new stories and the old prove that he’s one of the most inventive writers working today, constantly pulling apart and reassembling his stories until they don’t resemble anyone else’s.”—Time Out Chicago


“For almost 40 years, Steven Millhauser has been creating fables of identity, exploring how an irruption of the magical or inexplicable can unexpectedly transform a life or an entire society. . . .  Steven Millhauser possesses the wand of an enchanter. In his books the wonders never cease.”—The Washington Post

“Steven Millhauser's stories lure us into dark places with promises of magic and wonder, and we're unable to look away—much less flee—as the stories take a subtle turn and we see strange, even terrifying things moving toward us. This must be how a small animal feels as it waits, hypnotized, for the predator's pounce: In a word, we have been millhauserized. Millhauser's new collection, We Others: New and Selected Stories, offers 21 stories drawn from the past three decades. Among them is some of the best contemporary gothic fiction you're likely to come across.” —Richmond Times-Dispatch

“Focusing on offbeat subjects like magicians, knife throwers and Borgesian museums, working in an elegant, plainspoken style, Millhauser conjures ordinary worlds that are stalked by strangeness. Blending the eerie and the true is his hallmark; at every turn he reminds us of how eager we are for a sense of magic in our lives.” —Minneapolis Star Tribune