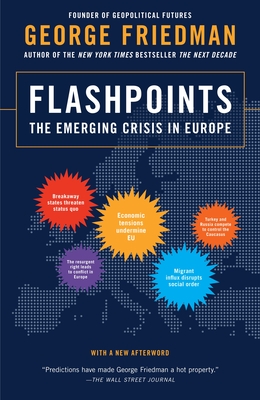 A fascinating portrait of modern-day Europe, with special focus on significant political, cultural, and geographical flashpoints where the conflicts of the past are smoldering once again—from acclaimed New York Times bestselling author and geopolitical forecaster George Friedman.

For the past five hundred years, Europe has been the nexus of global culture and power. But throughout most of that history, most European countries have also been volatile and unstable—some even ground zero for catastrophic wars. As Friedman explores the continent’s history region by region, he examines the centuries-long struggles for power and territory among the empires of Spain, Britain, Germany, and Russia that have led to modern crises: economic instability in Greece; breakaway states threatening the status quo in Spain, Belgium, and the United Kingdom; and a rising tide of migrants disrupting social order in many EU countries.

Readers will gain a new understanding of the current and historical forces at work—and a new appreciation of how valuable and fragile peace can be.

GEORGE FRIEDMAN is founder and chairman of Geopolitical Futures, which specializes in geopolitical forecasting. Prior to 2015, Friedman was chairman of the global intelligence company Stratfor, which he founded in 1996. Friedman is the author of six books, including the New York Times bestsellers The Next 100 Years and The Next Decade. He is a senior advisor to Gallup, Inc.  He lives in Austin, Texas.
“There is a temptation, when you are around George Friedman, to treat him like a Magic 8-Ball.” —The New York Times Magazine

“One of the country’s leading strategic affairs experts.” —Lou Dobbs

“Considering how right [Friedman’s] been over the years, he’s worth listening to.” —San Antonio Express-News

“Insightful. . . . Friedman vividly describes a region where memories are long, perceived vulnerabilities are everywhere, and major threats have emerged rapidly and unexpectedly many times before.” —Publishers Weekly