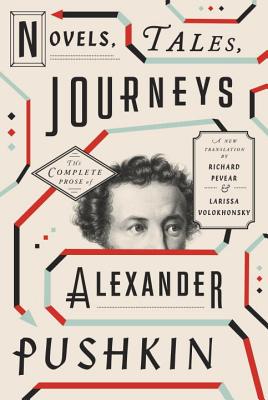 
Special Order—Subject to Availability
From the award-winning translators: the complete prose narratives of the most acclaimed Russian writer of the Romantic era and one of the world's greatest storytellers.

The father of Russian literature, Pushkin is beloved not only for his poetry but also for his brilliant stories, which range from dramatic tales of love, obsession, and betrayal to dark fables and sparkling comic masterpieces, from satirical epistolary tales and romantic adventures in the manner of Sir Walter Scott to imaginative historical fiction and the haunting dreamworld of "The Queen of Spades." The five short stories of The Late Tales of Ivan Petrovich Belkin are lightly humorous and yet reveal astonishing human depths, and his short novel, The Captain's Daughter, has been called the most perfect book in Russian literature.
ALEXANDER PUSHKIN (1799-1837) was a poet, playwright, and novelist who achieved literary prominence before he was twenty. His radical politics led to government censorship and periods of banishment from the capital, but he eventually married a popular society beauty and became a regular part of court life. Notoriously touchy about his honor, he died at age thirty-seven in a duel with his wife's alleged lover.

RICHARD PEVEAR and LARISSA VOLOKHONSKY have translated works by Tolstoy, Dostoevsky, Chekhov, Gogol, Bulgakov, and Pasternak. They were twice awarded the PEN/Book-of-the-Month Club Translation Prize (for Dostoevsky's The Brothers Karamazov and Tolstoy's Anna Karenina). They are married and live in France.
"Novels, Tales, and Journeys, a new translation of Pushkin’s prose, displays the author’s immersion in Russian life even more directly than the poetry that has come to define his legacy; short novels like The Captain’s Daughter present Pushkin’s thoughts on social strife without the intermediate layer of verse."
—New Criterion

“Brilliant. . . . [Pushkin] took up narrative prose on a whim, but, as this collection makes clear, he mastered it gloriously.” —Los Angeles Review of Books

“Superb gathering of writings by the short-lived author Alexander Pushkin (1799-1837), best known as a poet—but, argues translator Pevear, also ‘the true originator of Russian prose.’ Scholars will argue over whether Evgeny Onegin is novel or poem, but this anthology makes a clear distinction between verse and prose, then gathers all of Pushkin's prose writings, down to a few delicious fragments. One of them, it seems, was enough to inspire Leo Tolstoy to build the novelistic world of Anna Karenina around just a few words. . . . All the universal emotions and realities are in play, from jealousy to greed and overweening ambition, and Pevear and his longtime partner Volokhonsky render Pushkin's words in an easy, conversational tone that is very far from the fustiness of the Constance Garnett renderings of old. The completed pieces are masterful, but the fragments are tantalizing; one wonders what Pushkin would have done had he lived to complete the piece that begins, ‘My fate is decided. I am getting married. . . . ’ A long overdue collection that speaks truly and well to Pushkin's brilliance as a prose stylist as well as observer of the world.”
—Kirkus Reviews (starred)

“Pushkin (1799–1837), arguably Russia’s greatest poet, finds worthy translators in Pevear and Volokhonsky, who have compiled an indispensable edition of the master’s complete prose. Pushkin’s great ambition, keen curiosity, and comprehensive range are all in evidence here, beginning with the unfinished ‘The Moor of Peter the Great,’ a historical fiction about the writer’s grandfather, an African courtier of the czar. Russian history also figures in the short novel ‘The Captain’s Daughter,’ set during a bloody 18th-century peasant rebellion, as a young officer in a besieged rural fortress develops a strange comradeship with the Cossack ringleader of the uprising. In ‘Dubrovsky,’ a young aristocrat flouts the law after his inheritance is unjustly denied him. Always mindful of his position vis-à-vis European literature, Pushkin both draws on romanticism and lampoons it; in the short story ‘The Queen of Spades,’ rational young engineer Hermann comes to believe in a mystic secret of gambling, and in his quest to learn the secret wrecks several lives, including his own. Pushkin moves with great facility from bored, hotheaded St. Petersburg aristocracy to the pastoral peccadilloes of country squires and the deprivations of peasant life (‘The Tales of the Late Ivan Petrovich Belkin’), and even farther afield, to the exoticized landscape of the Caucasia (‘Journey to Arzrum’). Pushkin the storyteller is witty and compassionate, panoramic and precise. Although he’s best known in the States for poetry, in this thoughtfully annotated, syntactically loyal edition, readers will discover another facet of a prodigious talent.”
—Publishers Weekly