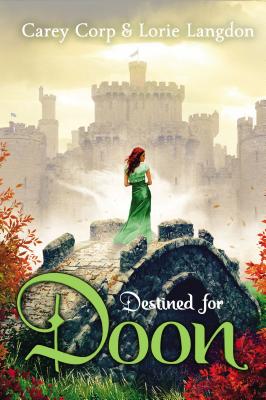 This is book number 2 in the Doon Novel series.

In this sequel to Doon, Kenna Reid has made a horrible mistake--choosing to follow her dreams of Broadway instead of staying in the enchanted land of Doon. But when Duncan, prince of Doon, appears with an urgent message from Veronica, MacKenna is given a second chance at Doon and true love. With an evil magic lurking across Doon, and MacKenna's destiny entwined with the cure, can she make peace with her decisions, or will she succumb them.

One year after the events that took MacKenna and her best friend Veronica to the magical land of Doon, Kenna is rethinking her decision to walk away from her friend, Doon, and the highland prince of her dreams - Duncan. To make everything worse, she's received her Calling--proof she and Duncan are each other's one true love-- especially when visions of the very alluring Doonish prince appear right before she goes on stage. When Duncan appears and tells Kenna that Doon needs her, that Veronica needs her, she doesn't hesitate at second chances.

Not all is right in Doon, though Jamie and Veronica have blossomed into a full romance, Kenna can't help but sense that Duncan is yet to forgive her for breaking his heart and abandoning him to pursue her Broadway dreams. As they investigate the dark magic plaguing Doon from the inside, they discover that the witch has left her mark, and not all wounds heal. MacKenna's fate and destiny are entwined with defeating the dark magic, but can she learn to forgive herself and release Doon from this plague? And even if she can defeat the evil, her happily ever after may still be in peril.

Don't miss out on the other Doon titles:

Carey Corp lives in the metropolitan Midwest with her loveable yet out-of-control family. Carey wrote her first book at the age of seven, and currently begins each morning consuming copious amounts of coffee while weaving stories that capture her exhaustive imagination. She harbors a voracious passion (in no consistent order) for mohawks, Italy, musical theater, chocolate, and Jane Austen. Carey's debut novel for teens, The Halo Chronicles: The Guardian, earned her national recognition as 2010 Golden Heart finalist for best young adult fiction and was recently featured at the 2012 RT Booklovers Convention in Chicago in YA Alley.