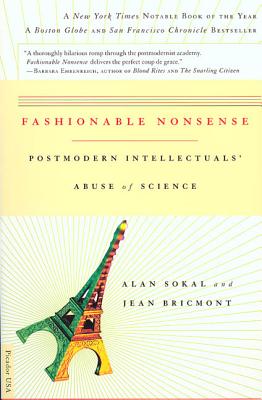 Soon thereafter, the essay was revealed as a brilliant parody, a catalog of nonsense written in the cutting-edge but impenetrable lingo of postmodern theorists. The event sparked a furious debate in academic circles and made the headlines of newspapers in the U.S. and abroad.

In Fashionable Nonsense: Postmodern Intellectuals' Abuse of Science, Sokal and his fellow physicist Jean Bricmont expand from where the hoax left off. In a delightfully witty and clear voice, the two thoughtfully and thoroughly dismantle the pseudo-scientific writings of some of the most fashionable French and American intellectuals. More generally, they challenge the widespread notion that scientific theories are mere "narrations" or social constructions.

Alan Sokal is a professor of physics at New York University.

Jean Bricmont is a theoretical physicist with the Université de Louvaine in Belgium.

“Although Sokal and Bricmont focus on the abuse and misrepresentation of science by a dozen French intellectuals, their book broaches a much larger topic--the uneasy place of science and understanding of scientific rationality in contemporary culture.” —Thomas Nagel, The New Republic

“An excellent discussion . . . a plea for a sensible understanding of science and a welcome antidote to irrationality.” —Simon Moss, Houston Chronicle