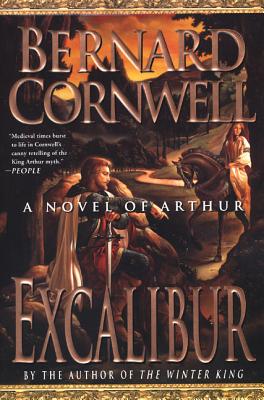 This is book number 3 in the Warlord Chronicles series.

In The Winter King and Enemy of God Bernard Cornwell demonstrated his astonishing ability to make the oft-told legend of King Arthur fresh and new for our time. Now, in this riveting final volume of The Warlord Chronicles, Cornwell tells the unforgettable tale of Arthur's final struggles against the Saxons and his last attempts to triumph over a ruined marriage and ravaged dreams.

This is the tale not only of a broken love remade, but also of forces both earthly and unearthly that threaten everything Arthur stands for. Peopled by princesses and bards, by warriors and magicians, Excalibur is the story of love, war, loyalty, and betrayal-the work of a magnificent storyteller at the height of his powers.

Bernard Cornwell, who has been called "one of the most accomplished storytellers now writing" (Kirkus Reviews) is the author of numerous international bestsellers, including the Sharpe series. He was born in Britain and now lives with his wife in Cape Cod.

“The action is gripping and skillfully paced, cadenced by passages in which the characters reveal themselves in conversation and thought, convincingly evoking the spirit of the time.” —Publishers Weekly on Excalibur (starred review)

“The best Arthurian since Gillian Bradshaw, if not Mary Stewart herself.” —The Magazine of Fantasy and Science Fiction on Enemy of God

“The strength of the tale lies in the way Cornwellflesh-and-blood tells it through the creation of fesh-and-blood players who make a historical period come magically alive.” —The Washington Post on The Winter King