Against Interpretation: And Other Essays (Paperback) 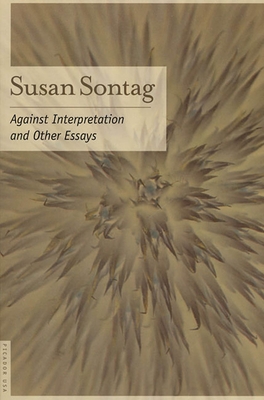 Against Interpretation: And Other Essays (Paperback)

Includes the essay "Notes on Camp," the inspiration for the 2019 exhibition Notes on Fashion: Camp at the Costume Institute of the Metropolitan Museum of Art

Against Interpretation was Susan Sontag's first collection of essays and is a modern classic. Originally published in 1966, it has never gone out of print and has influenced generations of readers all over the world. It includes the groundbreaking essays "Notes on Camp" and "Against Interpretation," as well as her impassioned discussions of Sartre, Camus, Simone Weil, Godard, Beckett, Levi-Strauss, science-fiction movies, psychoanalysis, and contemporary religious thought.

This edition has a new afterword, "Thirty Years Later," in which Sontag restates the terms of her battle against philistinism and against ethical shallowness and indifference.

Susan Sontag was the author of four novels, including The Benefactor, Death Kit, The Volcano Lover, and In America, which won the 2000 National Book Award for fiction; a collection of stories, I, etcetera; several plays, including Alice in Bed; and nine works of essays, among them On Photography, which won the National Books Critics Circle Award for criticism. In 2001, Sontag was awarded the Jerusalem Prize for the body of her work. She died in New York City in 2004.

“Susan Sontag's essays are great interpretations, and even fulfillments, of what is really going on.” —Carlos Fuentes

“Susan Sontag is a writer of rare energy and provocative newness.” —The Nation

“The theoretical portions of her book are delightful to read because she can argue so well. . . . Her ideas are consistently stimulating.” —Commentary

“She has come to symbolize the writer and thinker in many variations: as analyst, rhapsodist, and roving eye, as public scold and portable conscience.” —Time