High Tide: The Truth About Our Climate Crisis (Paperback) 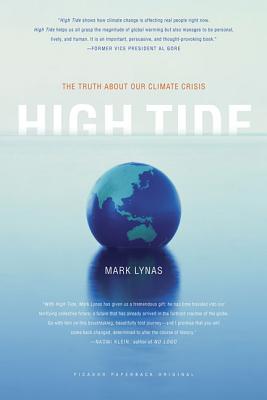 High Tide: The Truth About Our Climate Crisis (Paperback)

"President Bush and his Administration have risen to the global warming challenge with responses ranging from obfuscation to pretense to outright denial...I'd like to issue each and every one of them a challenge. Come with me--see what I have seen--and try to understand what global warming really means for us and for our children. Leave Washington and travel to the places I have visited..."--From the Preface

A glacier disappears high in the Peruvian Andes. Floodwaters surge across the English countryside. Ten thousand Pacific Islanders begin to evacuate their homeland. A dust storm turns day into night across the Inner Mongolian plains. These events may seem unrelated, but they are not. Even as scientists and other experts debate the specifics, climate crisis is already affecting the lives of millions.

In this ground-breaking book, Mark Lynas reveals the first evidence--collected during an epic three-year journey across five continents--about how global warming is hitting people's lives all around the world. From American hurricane chasers to Mongolian herders, from Alaskan Eskimos to South Sea islanders, Lynas's encounters and discoveries give us a stark warning about the even worse dangers that lie ahead if nothing is done.

High Tide's message is urgent and its revelations are at once shocking and inspiring--shocking as so few of us yet realize the magnitude of what's happening, and inspiring as there is still time to avert much greater catastrophe. No one who reads this book will be able to look their children in the eyes and say "I didn't know."

- CRIPPLING DROUGHT: China's Yellow River no longer reaches the sea for half the year, and villages across the north of the country are disappearing under advancing sand dunes

- BAKED ALASKA: Permafrost is melting, leaving houses, roads and whole forests sucked into the thawing ground. Winter is in retreat, leaving animals confused and Native Alaskan people without a livelihood

- HIGH TIDES: Islanders on the tiny South Pacific nation of Tuvalu are already leaving their homeland as rising sea levels engulf their atolls. Today 70 percent of the world's sandy shorelines are retreating; up to 90 percent of the beaches on the Eastern U.S. seaboard are eroding fast

- CATASTROPHIC FLOODS: English villagers now talk about a "wet season" rather than a winter. Heavier rainfall is now falling across the global mid-latitudes, from the continental U.S. to Russia, sparking devastating floods on an ever more frequent basis.

Mark Lynas is a journalist, campaigner and broadcast commentator on environmental issues. He is a contributor to the New Statesman, Ecologist, Granta and Geographical magazines, and the Guardian and Observer in the UK. He lives in Oxford, England.
"This could well serve as a primer for budding anti–global-warming activists" —Publishers Weekly